The Top Sights in Mykonos 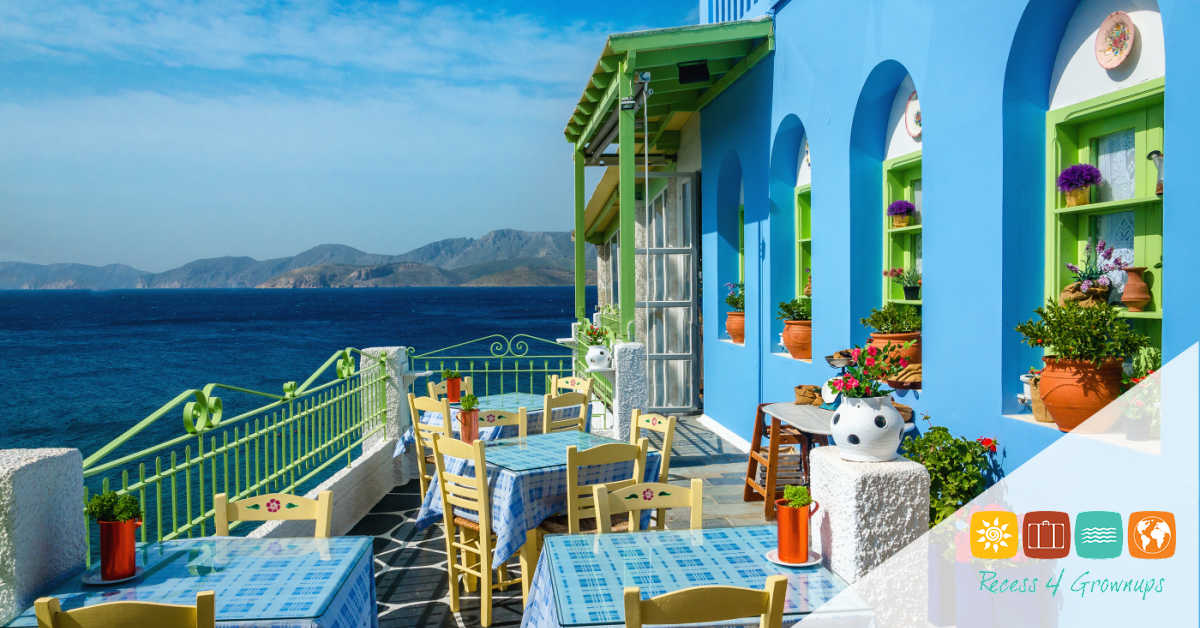 This weekend when I finally closed out work for the week – I have strict policy of no work on Sundays unless I have clients flying or traveling – I ended up working on my own trip arrangements. I had some Delta certificates that I wanted to use for traveling to Poland and Greece later this year with our groups, and I was able to max out the value with some sweet upgrades.

Making those reservations definitely got me dreaming about Greece, as it’s one of my favorite destinations and one that is on many bucket lists. My husband and I celebrated our 40th anniversary there this past September, and we loved our time in Mykonos, seeing the sights and eating some amazing food. That visit, and the fact that we will be there again this October for our Footsteps of Saint Paul trip, inspires this week’s article.

Mykonos is one of the most famous and popular of the Greek islands. Renowned for its glorious sun, white sandy beaches, laid back vibe and vibrant night life, it is a great candidate for any traveler looking to visit Greece. In this article, we’ll take a look at some of the main attractions on the island. 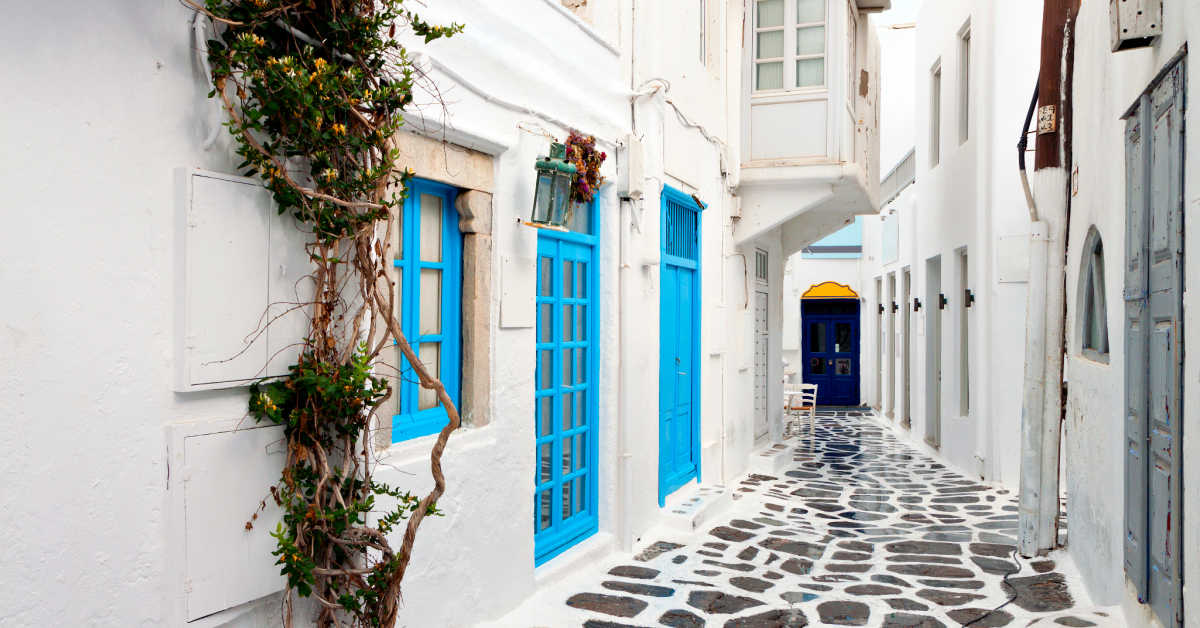 Chora, also known as Mykonos town, is the largest settlement on the island, home to most of its residents. Home to pretty whitewashed buildings, it is a gorgeous place to explore in the daytime. Beautiful painted doors and windows, tiny white churches and draping bougainvillea combine to make Chora one of the most picturesque places to visit in all of Greece. The town is largely pedestrianized, which only adds to the charm. There are no loud cars to disturb the peaceful atmosphere. Mykonos is an island of contrasts, with a relaxed daytime atmosphere which is transformed in the evening into something much livelier. Take a quiet daytime stroll to explore the sights of the town, and then return in the evening when bars and restaurants are packed, with music playing and heaps of tanned tourists and locals alike soaking up the vibrant atmosphere. 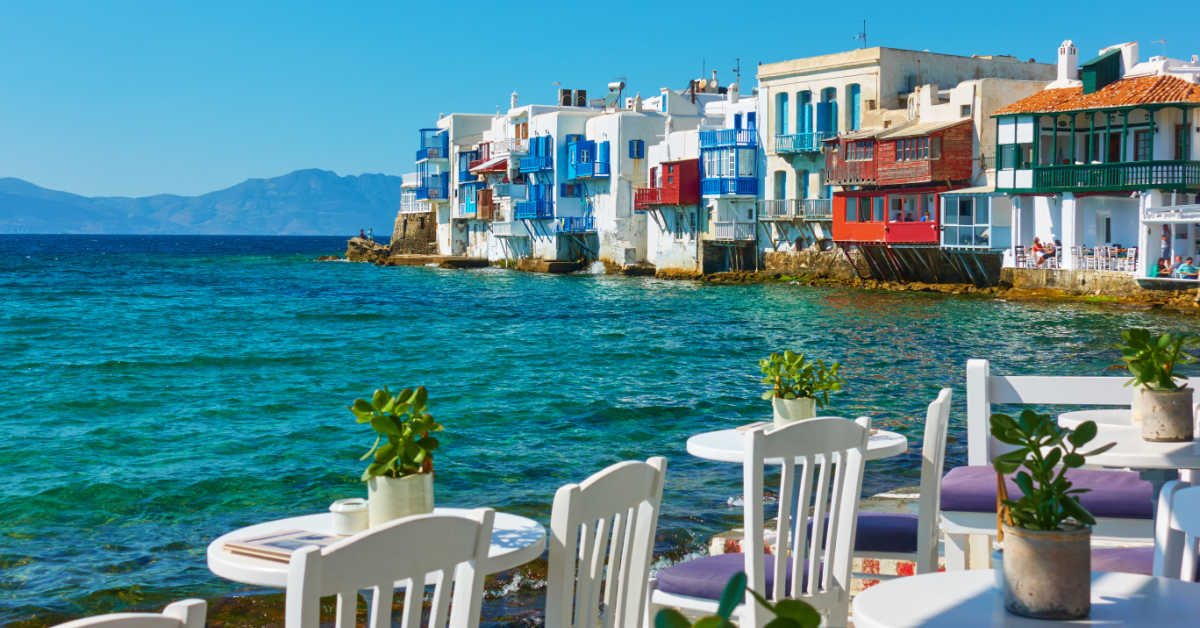 Known locally as Alefkandra, Little Venice is an area of Chora (Mykonos town). It is located a little south from the main harbor, overlooking the sea. Little Venice is characterized by tall, Venetian-style houses, narrow, pedestrianized streets, and a stunning waterside area. This part of the town houses a rich choice of restaurants and bars, which open out just  feet from the sea, with seaside tables offering a romantic location for a meal. It is no coincidence that the area looks out to the west, meaning the sunsets are some of the best you’ll find in the world, adding a little bit of extra sparkle to the area. 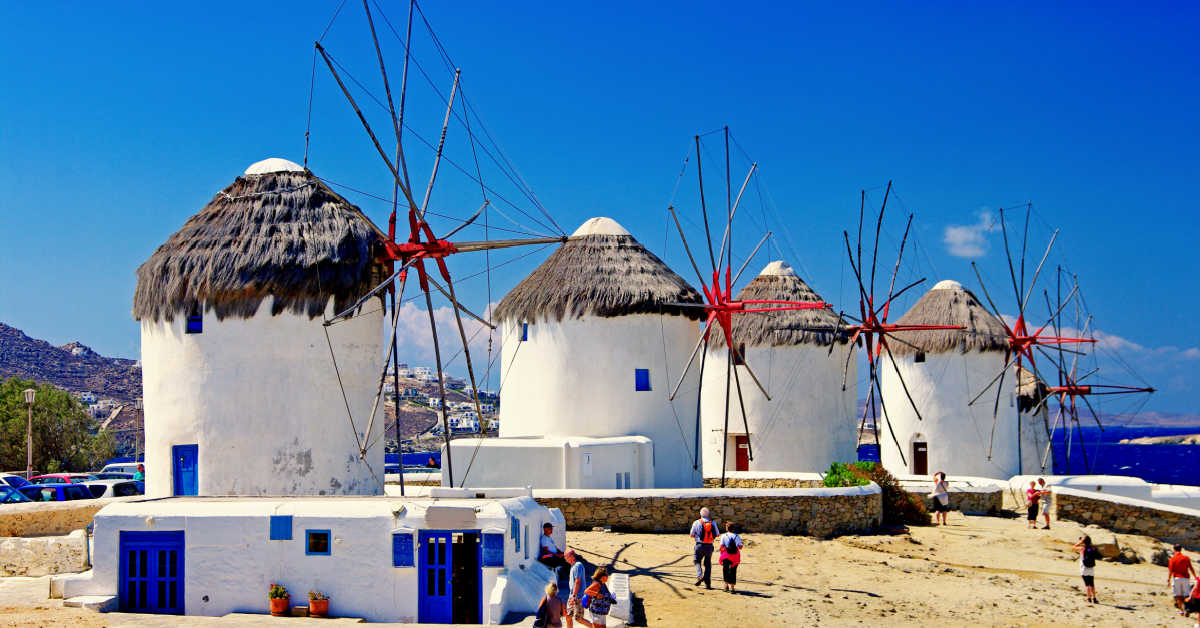 One of Mykonos’ nicknames is “The Island of the Winds”, due to the strong winds which blow across the island thanks to its location. And if you happen to arrive in Mykonos via the harbor, the first thing you are likely to see is the row of seven striking white windmills which have been making use of this wind for generations. It is believed they were built by the Venetians in the 16th century, in order to mill grain that was offloaded from ships at the harbor. The windmills are probably the most famous landmark on Mykonos, and it is an easy walk from the Little Venice area of Mykonos town to find them. Visitors can browse the small gift shop or snap away photos of the beautiful windmills – best visited at sunrise or sunset, when the white windmills contrast beautifully with the blue sea and the golden hues of the setting or rising sun. 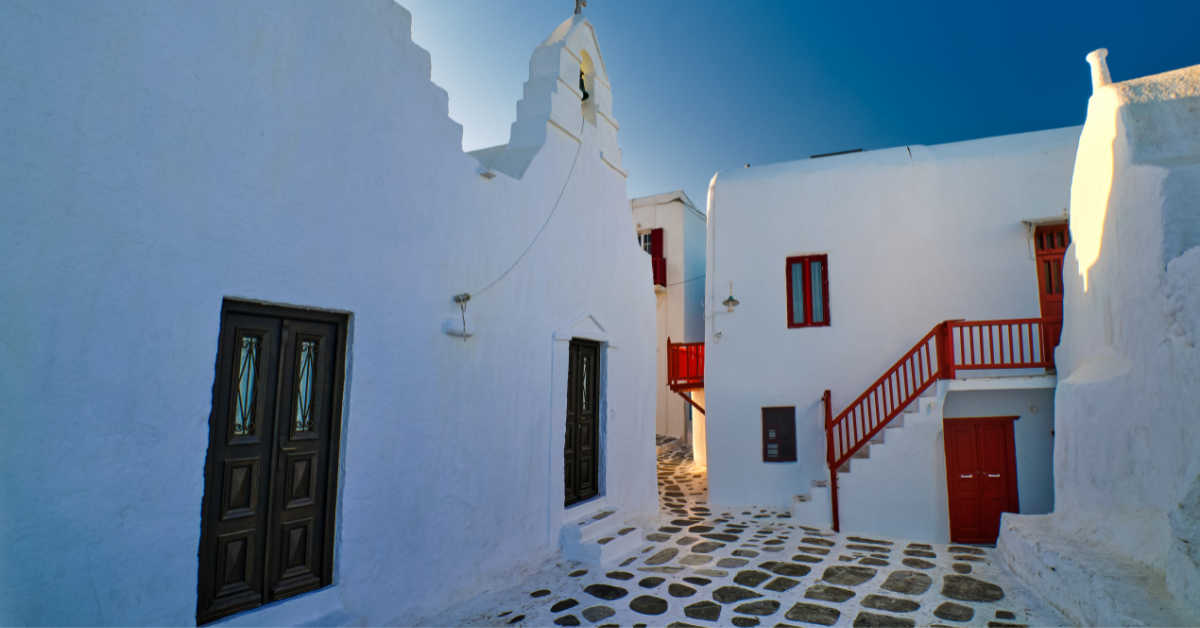 Another attraction you’ll want to visit in Mykonos town is the whitewashed Church of Panagia Paraportiani. Believed to have been completed in the 1600s, the church is actually made up of four separate churches which have been connected, with a fifth, larger church built on top. The fifth church is crowned with an impressive dome and dedicated to the Virgin Mary. It is an excellent example of the local architecture of the time and is highly likely to feature on any postcard of Mykonos you decide to send to the folks back home. 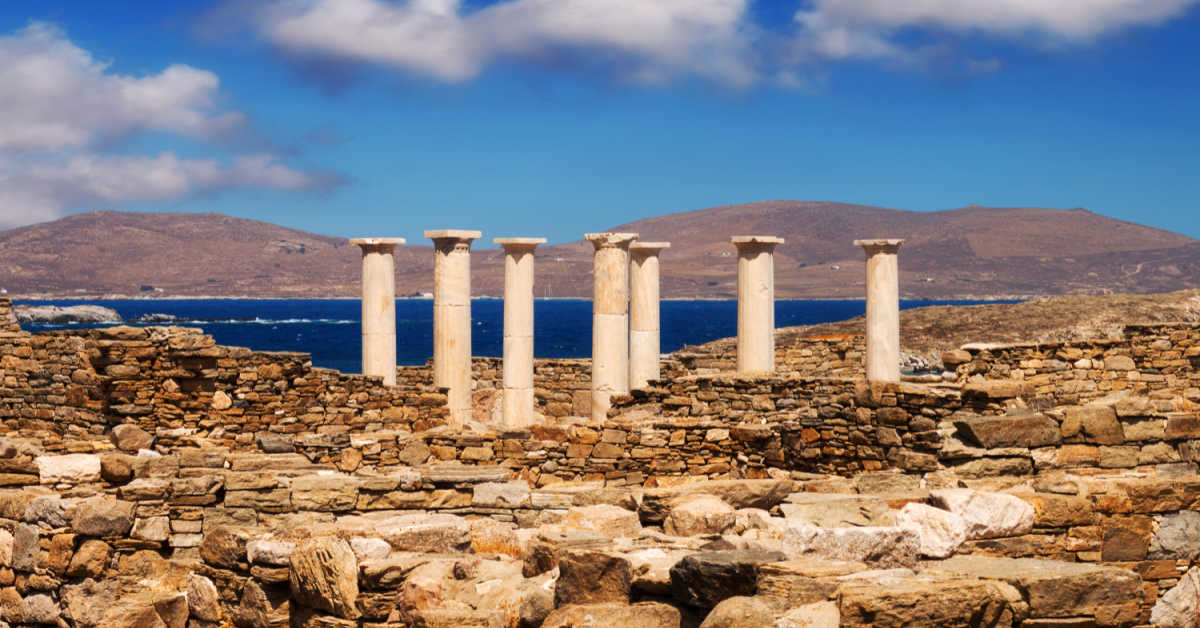 A popular excursion from Mykonos is a visit to the nearby tiny island of Delos. To reach the tiny island of Delos, you take a tour or ’ll have to catch the ferry from Mykonos town, which is easy enough, and a pleasant ride. According to Greek mythology, Delos was the birthplace of the twin gods Artemis and Apollo, and it is one of the country’s most famous archaeological sites. The ruins are remarkably well-preserved, and you’ll be able to see sites such as the 7th century BC Terrace of the Lions and the Minoan Fountain. The site was declared a World Heritage Site by UNESCO and many of the artifacts uncovered have now been moved inland to the Archaeological Museum of Delos. Some of the pieces held here include 3,500 year old ceramics, a bronze mask of Dionysos and an ivory plaque dating back to around 1400 BC. If you are taking a day trip to Delos, then you will certainly want to have a look around the museum before boarding the ferry back.

As you can see, Mykonos exudes appeal and there’s sure to be something to keep visitors entertained, however you like to spend your vacation. While the Greek cuisine is always a delicious invitation to travel there, Mykonos town offers gorgeous architecture, plenty of places to wine and dine, and blissful beaches all over the island. 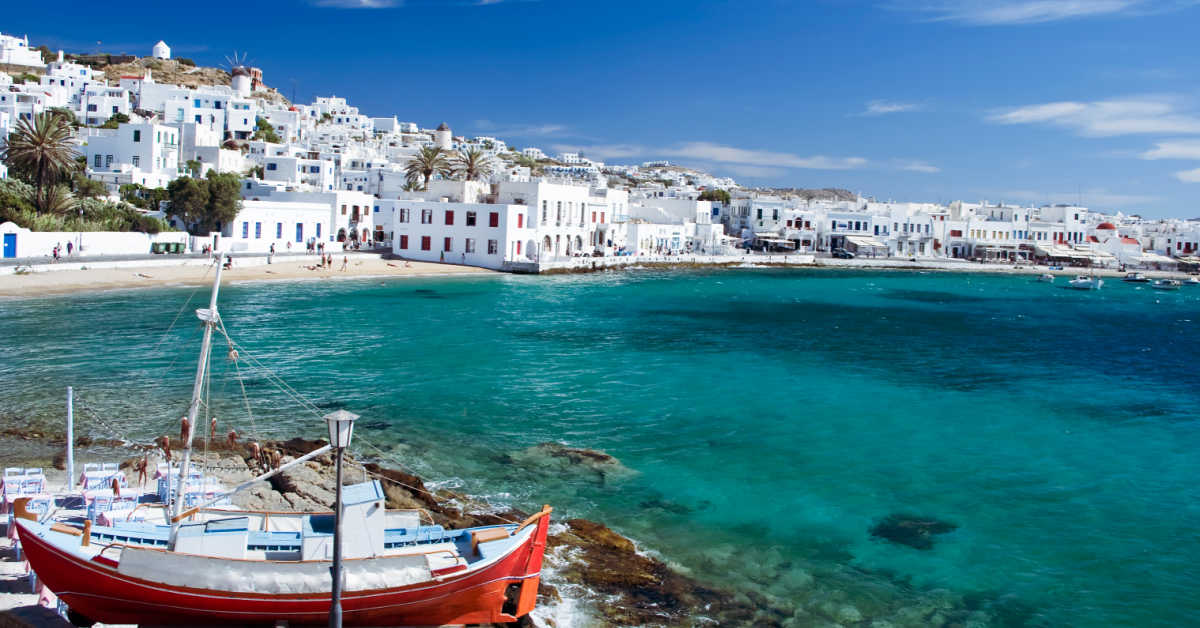