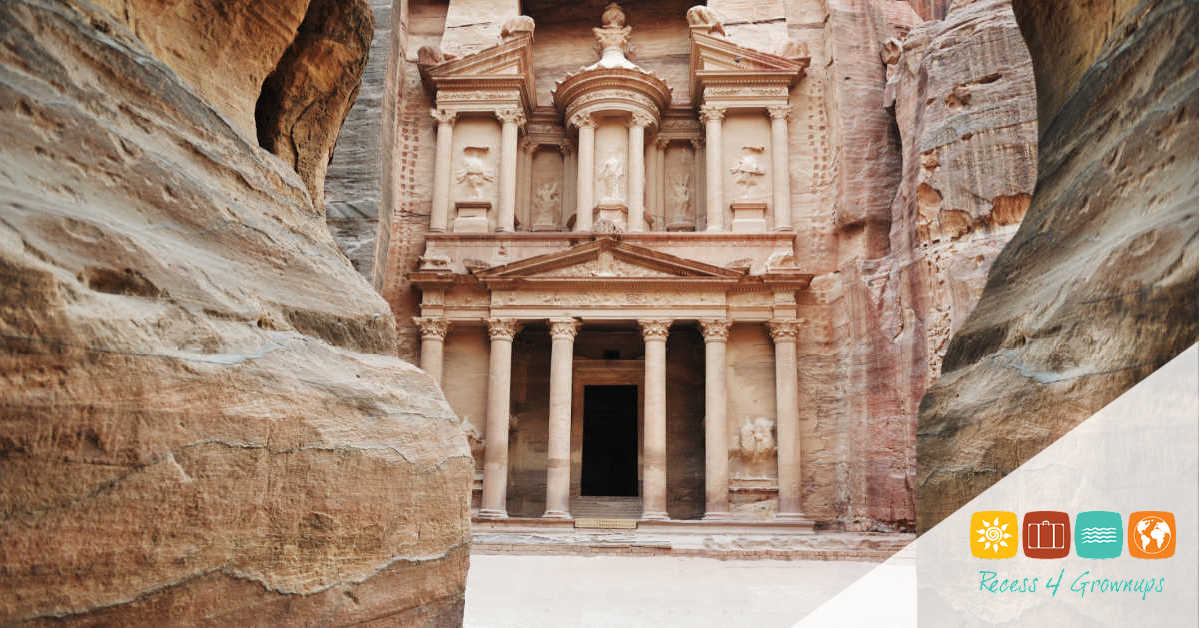 I’ve had my colored flair markers out this week as I map out all of our traveling clients for the next few months on a big master calendar – somehow life seems better when I get to color code everything.

I’m a nerd when it comes to scheduling things out and checking off boxes, and that’s true of planning bucket list trips. Our Clubhouse trips are built around seeing some of the iconic sights of the world, and one list that intrigues me is the Seven Wonders of the World.

While I work on travels to see every single one of those Wonders, I want to inspire your travel dreams by sharing one of those destinations that absolutely earns its spot on that list…

Petra, Jordan’s Wonder of the World 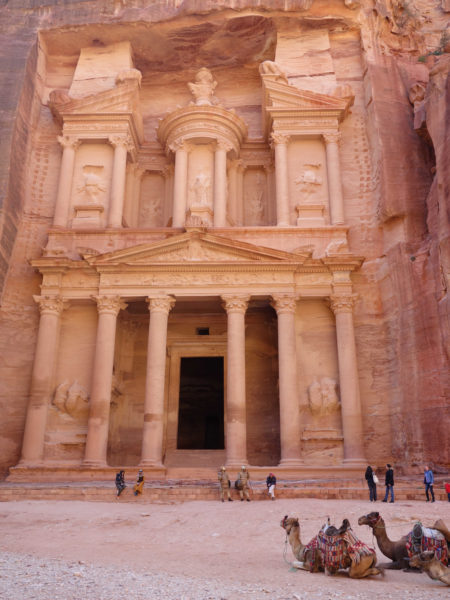 Dating back to the year 300 BC, the ancient Nabatean city of Petra is built into sandstone cliffs in a remote Jordanian desert. Little wonder it found itself listed as one of the New Seven Wonders of the World.

Petra prospered as a city because it was a trading partner for both the Roman Empire and the Egyptians, becoming exceedingly wealthy through the sale of minerals and scents such as frankincense.

Just 15% of Petra has been uncovered by archeologists, but there is still plenty to see. The main attractions are the Treasury, Al-Kazneh, and the Monastery, Ad-Deir. But there is much more to the city than just these highlights, and it is well worth taking a couple of days to fully explore.

Movie fans will recognize the Treasury from the blockbuster Indiana Jones and the Last Crusade, where the Holy Grail is secretly hidden.

In reality, the Treasury was built as a grand royal tomb for Aretas IV, thought to be the most powerful and successful of the Nabatean kings. 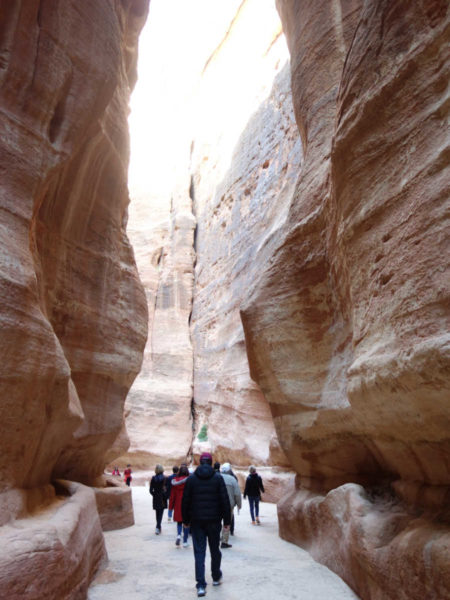 Perhaps the best thing about visiting the Treasury is that it can only be accessed through a very narrow rock-cut passageway, known as the Siq.

It takes about 30 minutes to wind through the passage, with the tension building and building until you finally burst out into the sunshine and can admire the Treasury in all its majesty. On certain evenings, Petra is illuminated by thousands of candles, which makes for an even more special experience.

Unfortunately, some tourists see the Treasury, take pictures, and then head back out, and they do not venture farther into the city. The first time I visited that’ exactly what happened with others in my group, which was sad. I learned to plan for plenty of time to continue exploring the city. There is much to be discovered by continuing beyond the Treasury to see the cave dwellings built into the sides of the cliffs and other notable sites on the way to the Monastery at the far end of the site.

The Theatre and Royal Tombs 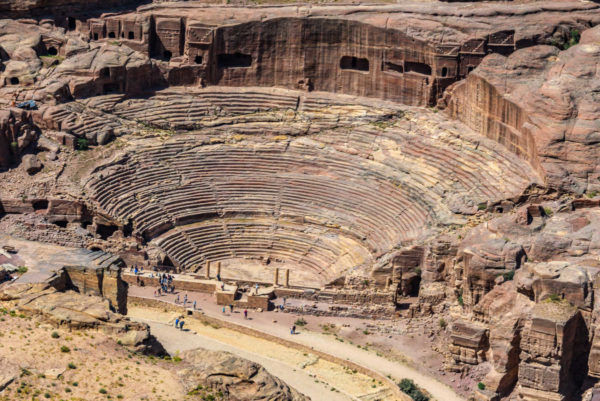 Visitors to Petra will also want to ensure they check out the Theatre. The rock-cut theatre would have once seated around 8,500 people for shows and other grand events. Inspired by the Romans, the architecture remains remarkably intact, with the semi-circular shape designed to enhance the acoustics of the performers on stage.

Directly across from the Theatre are the Royal Tombs. Not all of the Nabatean kings received the same treatment as Aretas IV; some had to settle for less. But the tombs are an impressive sight to see. Like many of Petra’s attractions, the main highlight is the rock-cut façade. You aren’t allowed inside very many of Petra’s attractions, but there is not much to see anyway. The glory of Petra lies in its exterior.

You’ll also want to pay a visit to the Corinthian Tomb. Not because it is spectacular, but because it will remind you how incredible the Treasury and the Monastery are. The Corinthian Tomb has not survived as well as its similar looking neighbors and is crumbling in places. 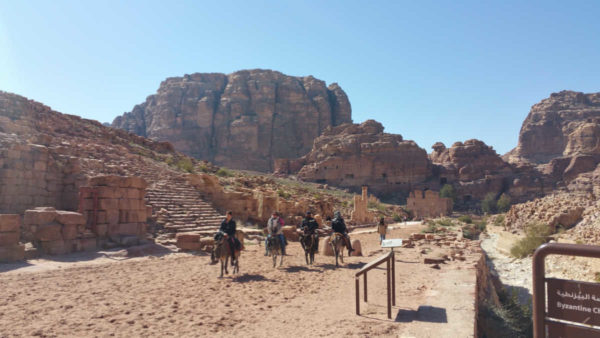 Part of the fun of exploring Petra is choosing your transportation – you aren’t dependent on just walking if you want to experience some of the other means of getting around Petra.

Donkeys are readily available to travel from the Treasury deeper into the city. You’ll find them throughout the site, so there is ample opportunity to try them out if you get tired later in the day.

One of the iconic sites of the Treasury includes camels sitting in front. Riding a camel through Petra is definitely a bucket list experience, and you can choose a short ride right around the Treasury area, or back farther into the city. There is a restaurant at the far end of the site, so one idea is to walk the path from the Treasury, stopping at the Theater and Royal Tombs and other monuments along the way, and then break for lunch. Afterward, catch a camel for your return to the Treasury, or try a donkey ride. 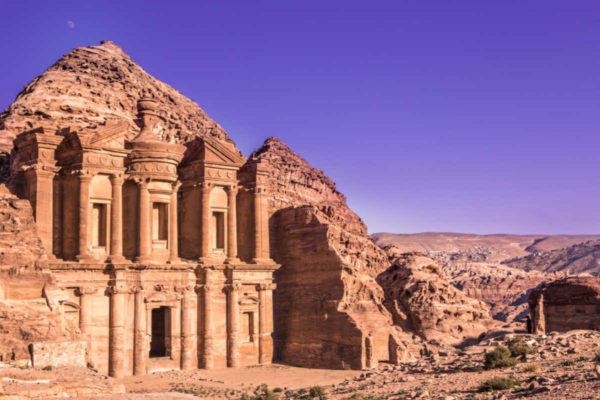 At the end of the path through the city, the Monastery is a grand finale. It isn’t as well known as the Treasury, but in many ways, it is even more impressive. Similar in looks, the Monastery is much larger and is located up a steep cliff. To be precise, 850 rock-cut stairs need to be climbed by anyone who wishes to see the Monastery for themselves.

It’s quite a climb, and you’ll want to take it slow and make sure you have a bottle of water with you, as the Jordanian sun can be searingly hot. But the rewards make the journey worthwhile. As well as being able to admire the Monastery in all of its glory, the view over the rest of Petra and the surrounding area is incredible. 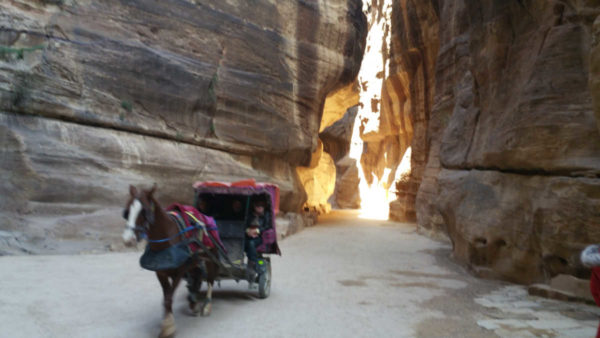 After your explorations in Petra, you will go back to the Treasury, and continue back through the Siq. A fun way to return to the visitor’s center is riding in a horse-drawn cart. Be aware, there are no shock absorbers, so you will save your feet but not your body, as the cart shakes and rattles you all the way back.

There is far more to Petra than the Treasury, although nothing compares to emerging from the Siq and appreciating its wonder for the first time. While in Petra you’ll want to allow yourself enough time to see everything and be prepared for some walking as it is a large place. But the effort is worth it, as there is nowhere else quite like this city. 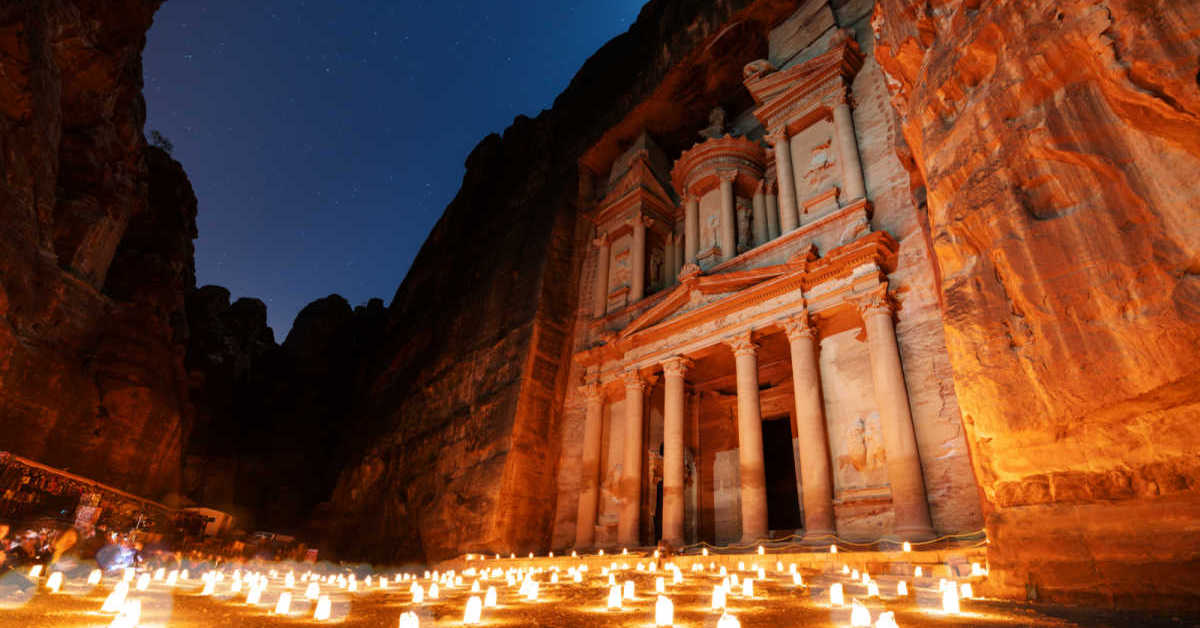