My Cruise Report from my July Mississippi River Cruise, Part 2 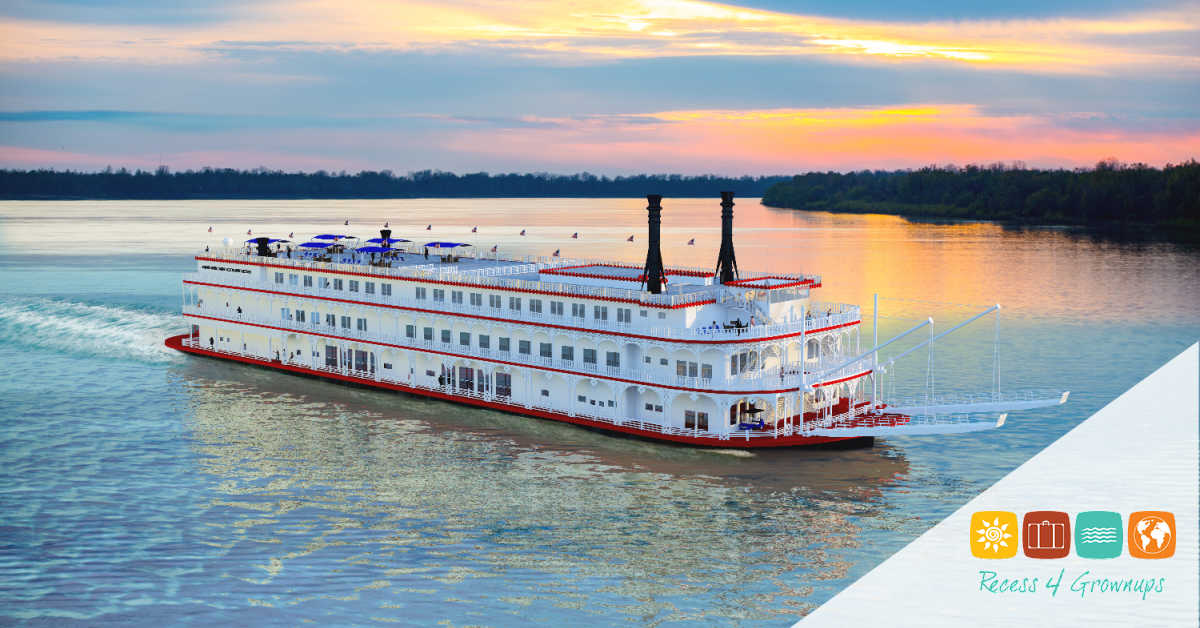 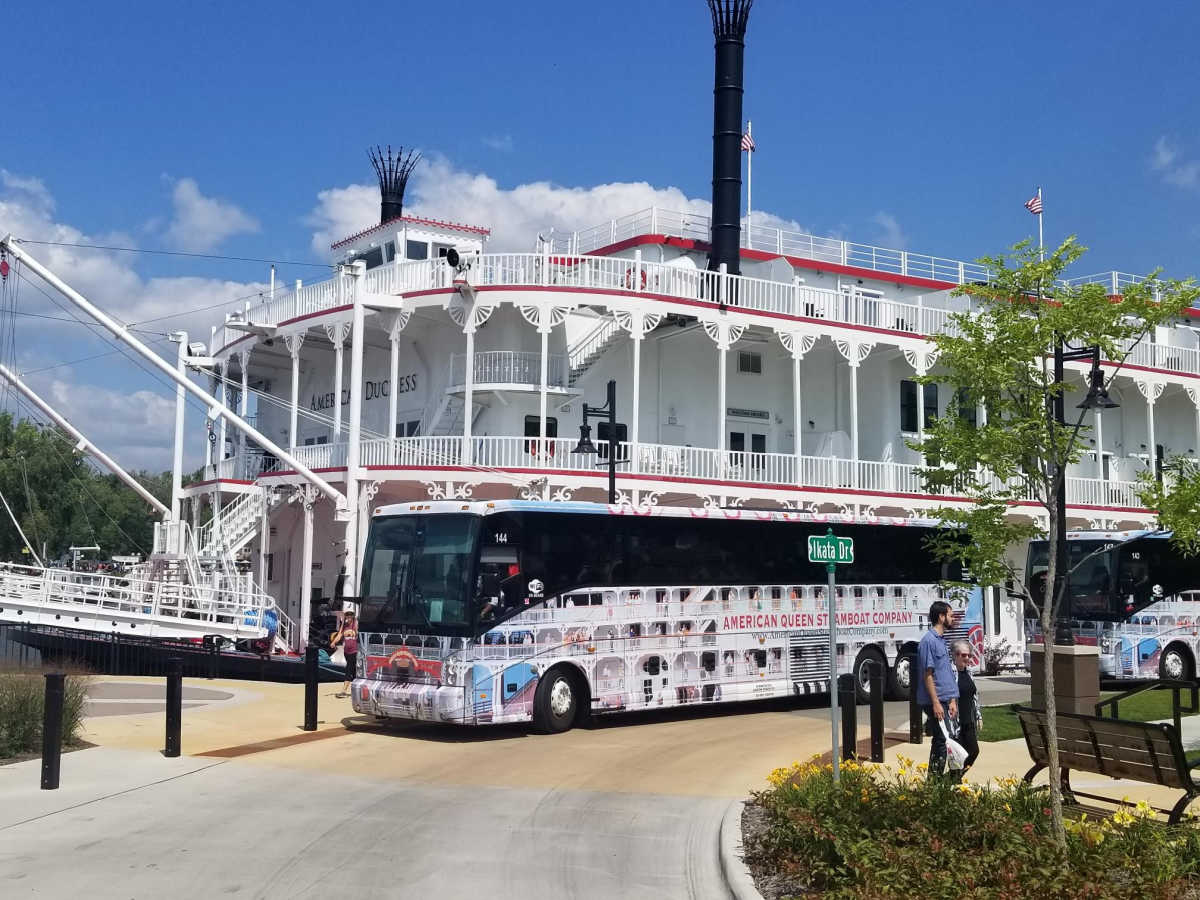 American Queen’s approach to shore excursions is a hybrid of traditional Hop-On Hop-Off buses, and regular shore excursions. AQSC designs a special route around the city, with 5-7 attractions and stops along the way, where they pre-pay all admission fees or tickets. The buses are painted to look like the steamboats, so you can’t miss it! You have the choice of which of the sights you want to visit, and all are complementary. There is a local guide from the town who narrates the day, and some were not good, just reading a script, while others represented their city well, as they dressed in period costumes and interjected extra personality and comments.

I will say that visiting small rural towns in the heart of America is quaint and enjoyable, but definitely a different experience than visiting some of the smaller towns you’d see on a European river cruise, like Melk or Giverny or Rudesheim. Similar to other types of travel contrasting Europe and the United States, it is the difference of seeing sights and towns that are thousands of years old in Europe, versus seeing sights that are hundred or so years old in the US. As long as you remember that difference, you can enjoy the places you’ll see along a river cruise in America. 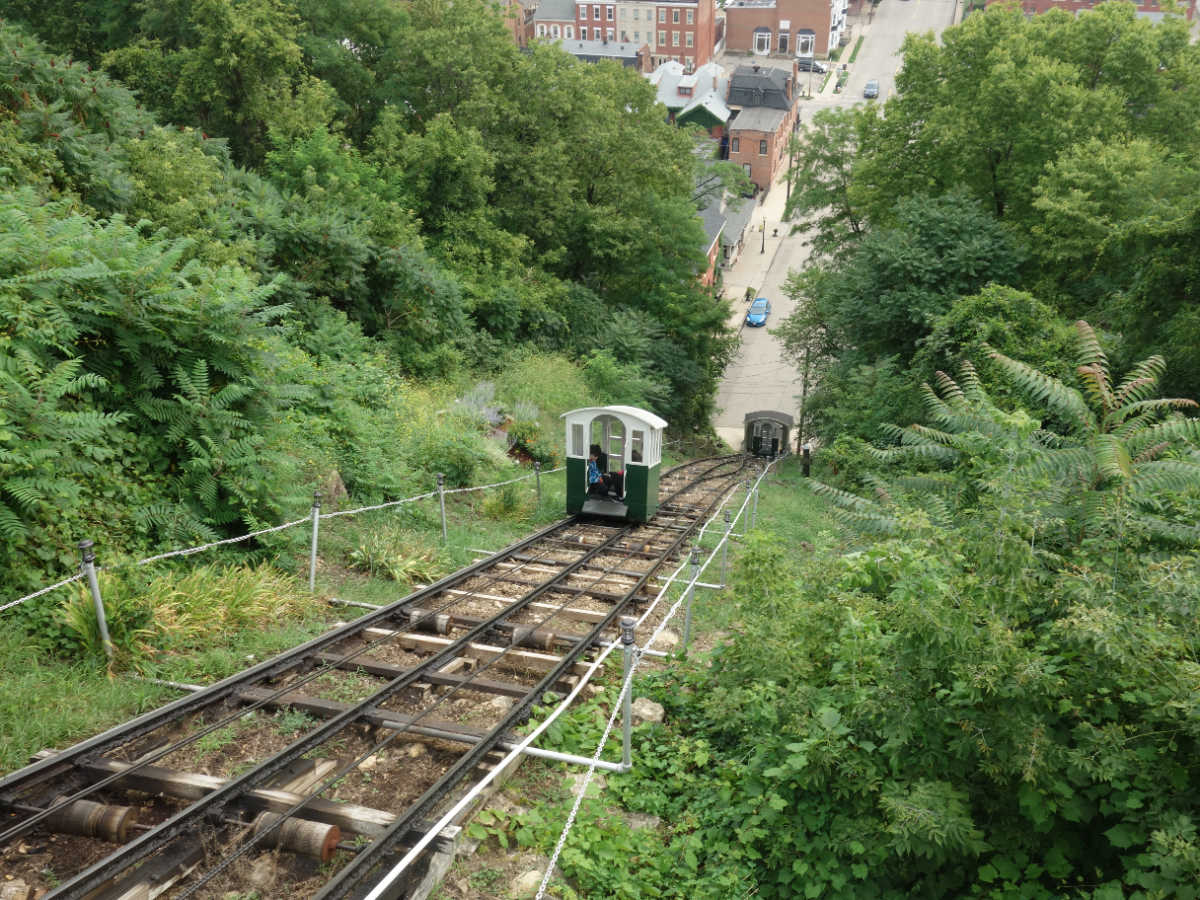 Each town had some unique visits and experiences that we really enjoyed. In Dubuque Iowa, my favorite was the Fenelon Place Elevator, a narrow-gauge funicular railway that gives you a sweeping view of the city all the way to the river so we could see the American Duchess. The Elevator is described as the shortest and steepest railroad in the world.

In Winona Minnesota we were astounded to find the Minnesota Marine Art Museum, named that because all the paintings are ‘great art inspired by water’. The museum had paintings by Monet, van Gogh, Matisse, Picasso, Gauguin, Degas, Toulouse-Lautrec and many more masters in their European Collection. The highlight of their American Collection is the iconic Washington Crossing the Delaware. Who would think you would find such a fascinating museum in a tiny town in Minnesota? 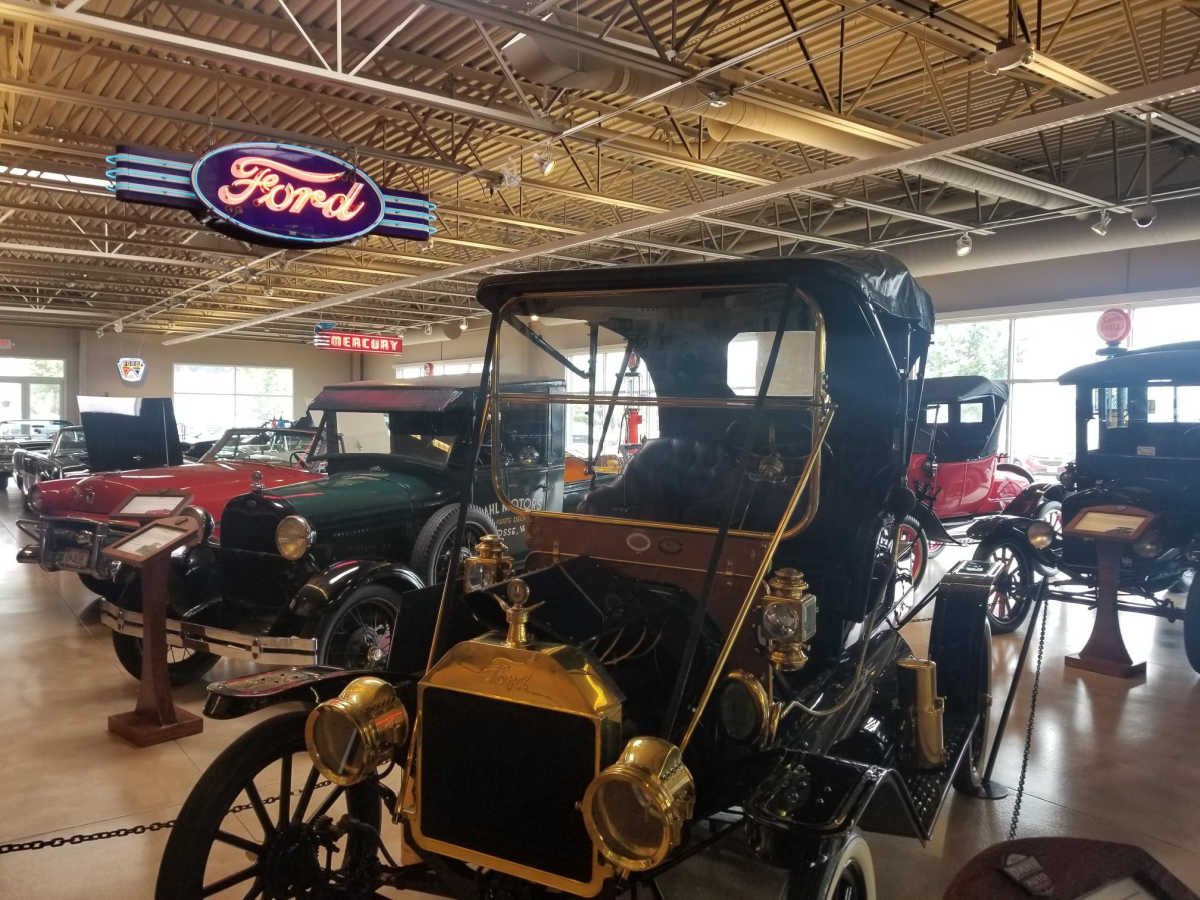 In La Crosse we say the Dahl Car Museum, filled with antique cars from the early 1900’s through the 1960’s. We also enjoyed the Friendship Garden the various themed gardens represented the sister cities of La Crosse around the world. In Prairie du Chien Wisconsin we saw the 1800’s Jail below the courthouse and enjoyed a pottery demonstration and tour at the Pottery Museum in Red Wing Minnesota. 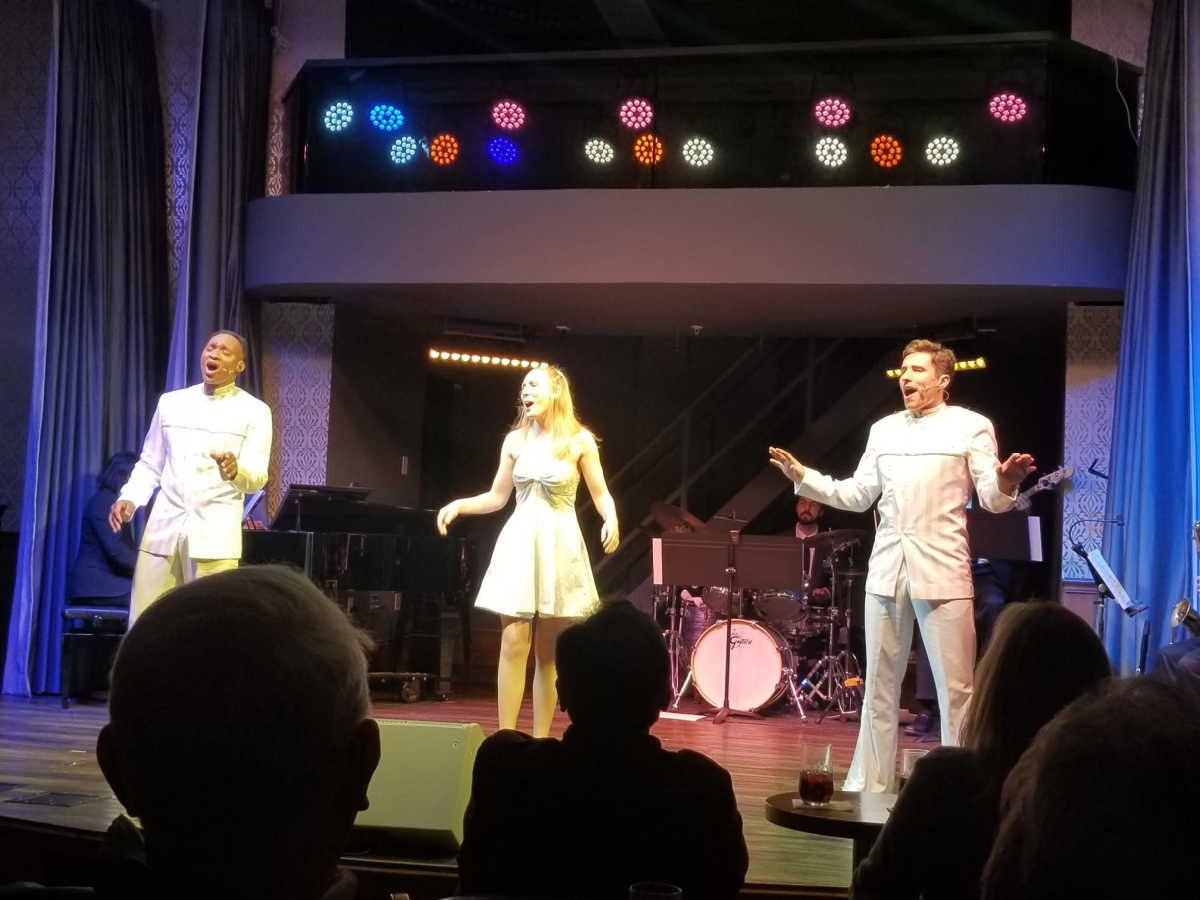 I thought the entertainment onboard was excellent. Each night there were two shows to accommodate those who ate early or late. The entertainment team was a total of three people, and they had a small stage with the house band, and I enjoyed every single show. Their singing talents were strong, and we discussed which we would be seeing in the future on a national stage. They were not just good for a small ship – they were just plain good for any size ship. I highly recommend going to the show each evening.

There was also a “River-lorian” who is extremely knowledgeable about the area and history of the Mississippi River. There were talks almost every day and provided great insights about the places we visited and the river. 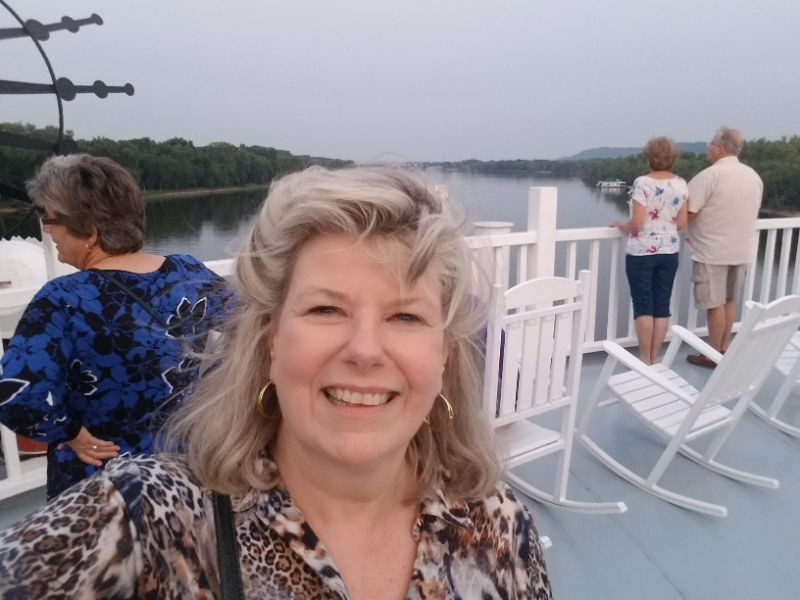 One form of entertainment on the ship is actually the process of cruising down the river. The scenery was beautiful, and I felt such a serene feeling sitting in a rocking chair upfront in the evenings, enjoying the light breeze and the quiet movement of the ship along the river.

Going through the locks on the river was always a thrill. On the first day of cruising all day, we went through 10 locks, so since our cruise was roundtrip from Red Wing Minnesota, over the next six days we went through those locks on our cruise back to the starting point. We enjoyed watching the process of going through the various lock styles – sometimes during early evening when we could stand on deck and watch, and sometimes during dinner when the huge windows would fill with the sides of the lock. 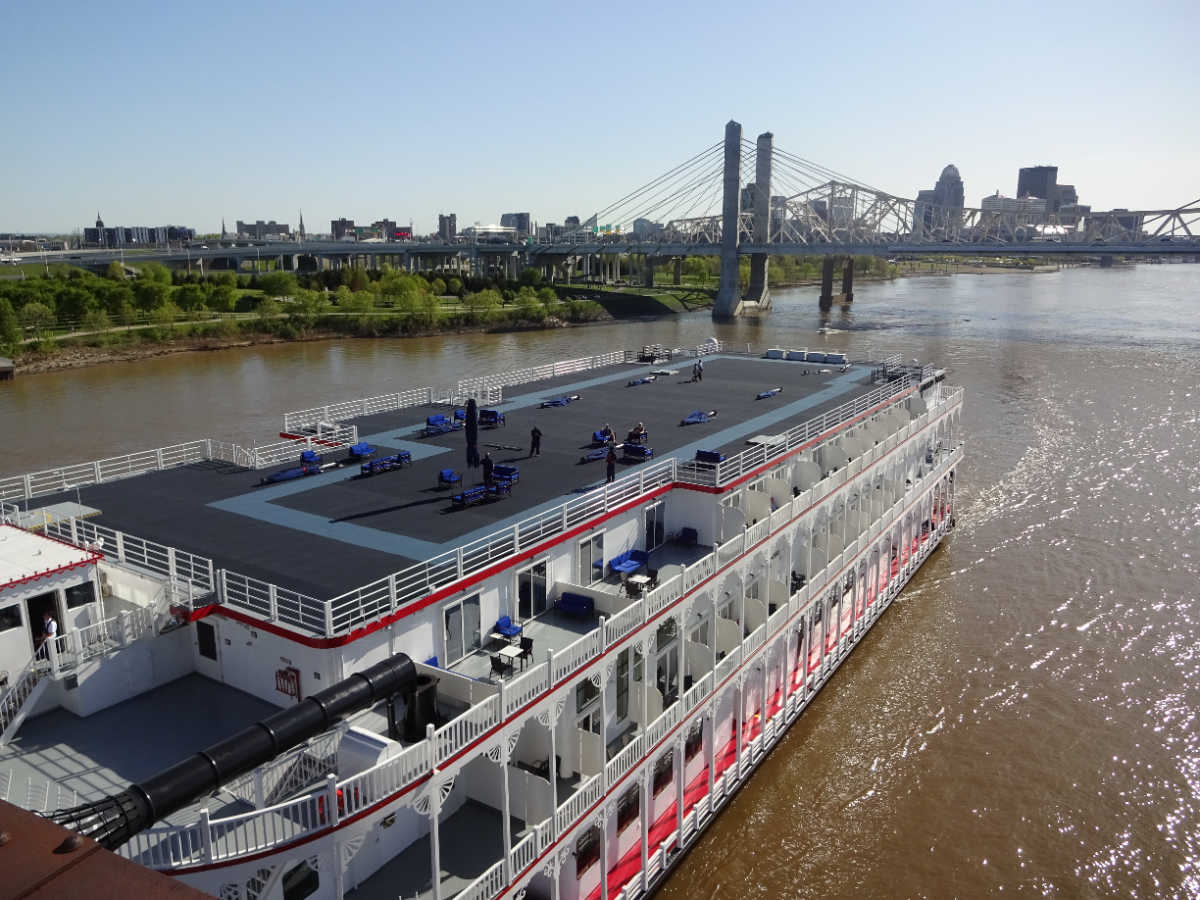 We went under 18 bridges on our initial cruising day, and it was fascinating to watch how our top deck seemed to barely miss the bridge. There were some bridges that swung sideways for the ship to pass, and others that opened. Each night as we moved from port to port, we would go under two to five bridges, so that made for an interesting element of our cruise.

I tend to prefer small ship sailing, and the thought is, the smaller the better. The Duchess was a lovely vessel, and I enjoyed the experience, but I will say that I’m really intrigued to sail on the American Queen in November, which has a passenger size of 400, and many more public areas and walkable space. The smaller American Duchess has fewer public areas of the ship and didn’t present a track to walk around the ship; in the past I had looked at the American Queen and its semi-private balconies as strange, but now I think its brilliant. The ability to walk the perimeter of each of the decks creates a more communal experience and a more interesting interaction of the activity with the ship.

We’ll be sailing on the “Home for the Holidays” sailing on the America Queen the week after Thanksgiving, and I’m very excited about river cruising again, this time on the larger American Queen paddle-wheeler. We’ll have a pre-cruise stay in New Orleans, and then visit Nottoway Plantation, St. Francisville LA Natchez, Vicksburg, and finish in Memphis.

Seeing all those traditional Southern homes decorated for Christmas will be beautiful, and the perfect way to start off the holiday season.

I hope you’ll consider joining me for the Holiday Sailing – check it out at: https://www.recess4grownups.com/lower-mississippi-cruise/

We have a number of stateroom categories left, and even though I’m traveling, Darby can help you with the options; you can call 678-824-5030 or email Travel@Recess4Grownups.com 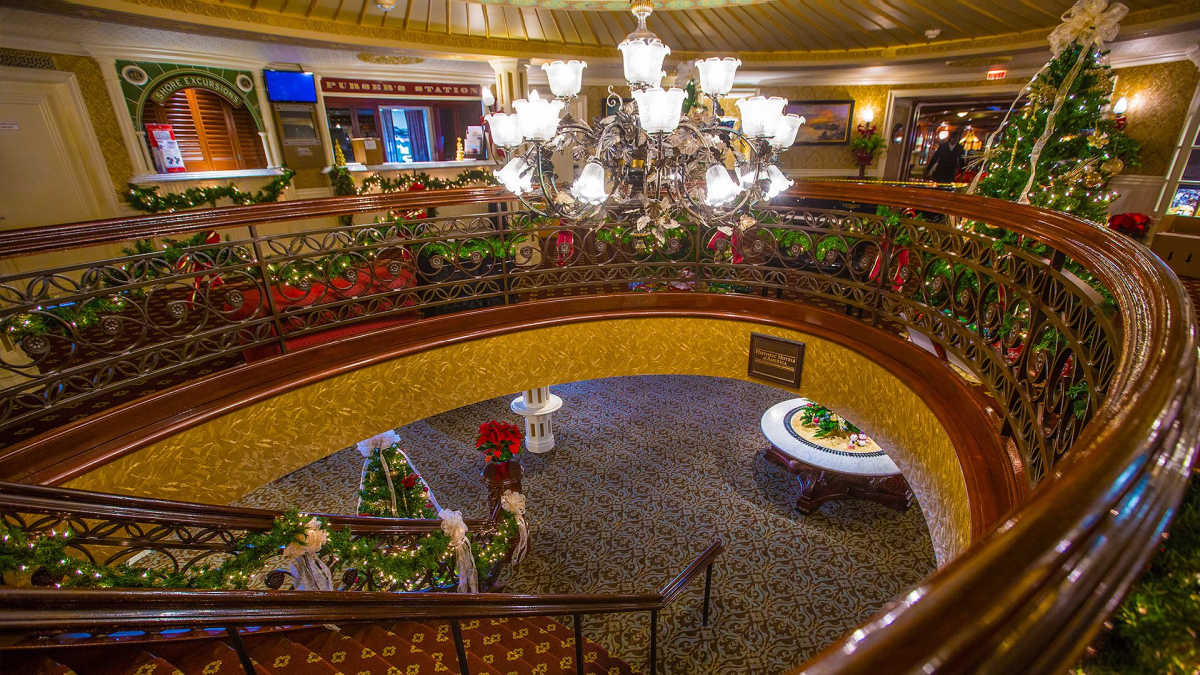