A Tattoo for your bucket list – Edinburgh Military Tattoo! 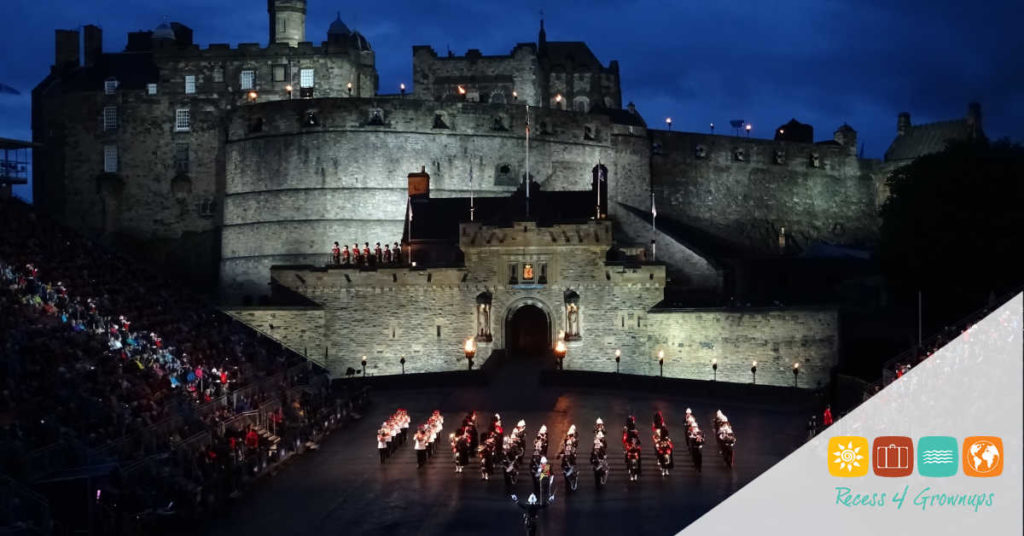 I had planned to be Scotland this week with my husband to see the Edinburgh Military Tattoo, but the trip was cancelled due to Covid. I’ve been fortunate enough to see it, but it’s been on his bucket list for years. It is a breathtaking experience, so I want to share why it should be on your bucket list…

Why the Edinburgh Military Tattoo should be on your Bucket List

Somehow years ago, I came across information about the Edinburgh Military Tattoo, and then made it my mission to attend – and it was indeed the spectacular experience I anticipated.

About the Royal Edinburgh Military Tattoo

The Royal Edinburgh Military Tattoo is a world-class public military musical and entertainment event that showcases marching bands, cultural performances, and musical groups from across the globe. 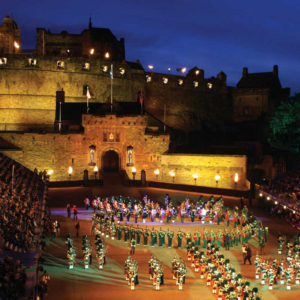 This is an extravaganza showcasing the traditional and ceremonial aspects of Scotland and features a spectacular view of Edinburgh Castle as the performance is on the Castle Esplanade, with the castle highlighted in various colors and designs as the show progresses. The ‘Tattoo’ takes place for about three weeks every year in August.

Since the Edinburgh Military Tattoo brings high-class performers from all over the world, it is nothing less than an explosion of extreme talent. It’s a worthy display of work and art which attracts the admirers of music and dance from all countries. The Royal Edinburgh Military Tattoo is the celebration of musical talent of the British Armed Forces, Commonwealth, and international military bands and their display teams that walk the ramparts of Edinburgh Castle. 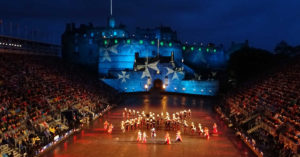 I enjoyed the variety of bands and groups, and all their performances were excellent; I will say my favorite was the drum and piping band that was truly outstanding, with a precision of motion and sound that was fascinating.

In case you are like me and were wondering about the name ‘Tattoo’ and what it has to do with all this – the word “Tattoo” became associated with military musical performances from a practice in the 18th century, when a cry of ‘doe den tap toe,’ implying ‘turn off the taps’, along with piping and drums, were signals to the soldiers that the merriment in the pubs was closed and it’s time to return to the barracks. 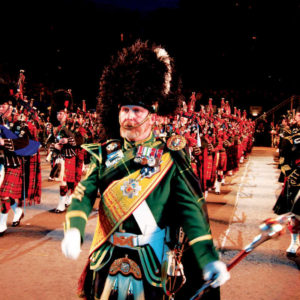 Although performances during the festival vary, some things are always there; the beginning is with the marching of a pipe band across the drawbridge of Edinburgh Castle.

The end of each performance is marked by the famous Robert Burns anthem, Auld Lang Syne. Spectators are supposed to cross their arms and grasp their neighbors’ hands while singing along.

Colorful fireworks light up the whole sky as the event approaches its final close. If you are meandering around the Edinburgh castle on any other evening, make sure to keep a watch on the sky to catch the glimpses of fantastic firework shows. 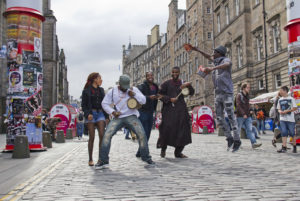 Having an unbeatable zeal for living their lives, Scottish people know how to have a great time. A range of Edinburgh Festivals brings the city to life with extreme thrill and excitement throughout the year. During August, other popular festivals like the Edinburgh Fringe Festival, Edinburgh International Festival, Book Fair, and many more are held alongside the Tattoo.

A spectacular wave of color runs through the city. Attending any of the Edinburgh festivals is a lifetime of opportunities to experience the world-class performing arts and visual works by Scottish and International artists.

The Edinburgh Fringe Festival is a top-rated event and is believed the biggest celebration of art and culture in the world, and takes place at the same time as the Edinburgh Military Tattoo. It has something to offer for everyone. Hundreds of stages are set around the city based upon different tastes. Talented artists and performers from the fields of comedy, theatre, music, opera, and spoken word visit the magnificent city of Edinburgh to participate in ‘the Fringe’ (my son performed in it twice in high school).

More to Explore in Scotland

Besides Edinburgh and its festivals, Scotland is a bucket list destination on its own with many historical attractions like Glasgow, Scottish highlands, Saint Andrews, Loch Ness, Aberdeen, Loch Lomond, Isle of Arran, Isle Of Skye, and Fort William.

Loch Lomond is an excellent tour from Glasgow along the Western Highland Way crossing through the Argyll countryside and reaching Fort William.

The Isle of Skye is the largest isles in Scotland and is especially popular amongst birdwatchers (watch more than 200 species of birds here), ramblers and nature lovers. It is marked by the incredible natural scenic beauty that comprises of beaches, caves, valleys, waterfalls, and more.

The Northern Highlands of Scotland are untamed landscapes with a long history. These are the most loved destination for hikers and bikers who enjoy golf, fishing, sea kayaking, white water rafting, gorge walking, and other outdoor adventures.

Add the Royal Edinburgh Military Tattoo to your list

Scotland is a must-see on every traveler’s bucket list, but I encourage you to time your visit to include the Royal Edinburgh Military Tattoo at the top of your list of experiences.

This is a one-of-its-kind event that renders lifetime experience to the viewers, and it cannot be explained in words; it’s better seen yourself.