I flew to Rapid City, South Dakota on Monday, which was my first time flying since everything went into lockdown in March, so I have the most current scoop on travel at this moment of Covid-19, so I share my experience in this week’s article…

I was up super early Monday morning for my flight to Rapid City. I wasn’t sure what to expect – would there be an Uber driver to pick me up at 5:45 am, would there be traffic in downtown, with reduced flights is the airport easy to breeze through or long lines because of reduced workers, what about wearing a mask around the airport and on the plane? Here’s what I learned…

Be flexible and plan for contingencies. When scheduling my flight to Rapid City, the two choices on Delta were either early in the morning or at night. The flight route is Atlanta to Minneapolis to Rapid City, and the morning schedule had only a 40-minute layover. Since I had to be in Rapid City by 1 pm on Tuesday, I didn’t feel confident scheduling that flight schedule on Tuesday, so I booked to go in a day early. I figured I would have a lot of buffer if a flight was canceled or I missed the connection, and if all went well, I’d have an extra day to explore Deadwood, a popular town in the area that we didn’t have on our agenda.

More timely flights. In normal times, I prefer Delta because they have a strong focus on on-time departures, although the busy skies can create delays and issues no matter what. But right now, the skies aren’t so busy, and it seems that this had made flight times more consistently accurate, based on my minimal analysis. Because of that short 40-minute layover, I checked the flight status of my two flights every day for the last eight days to see the trend and found that most days, the flights departed early, and in all cases arrived early or on time.

Uber is ready for you. The night before my flight I scheduled an Uber to take me to the airport at 5:45 am, and despite Uber’s disclaimer in the app that basically says “your driver is confirmed when he shows up, and if no one is there at the end of the pickup timeframe, your ride is canceled’, my driver was precisely on time. We had a pleasant ride chatting about what life is like for Uber drivers right now, and he told me that after a long lull during quarantine, he is as busy as ever, and they are looking to hire more drivers. And there was no traffic in downtown, and when I asked him what it was like at 8 am, he said it was just as empty. 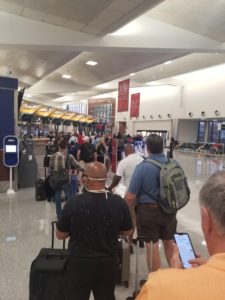 Plan extra time for luggage check-in. I start this out by saying I know this is a first-world problem – since I travel so much, I am used to breezing through luggage check-in with my Sky Priority status, and there was no such access at the Atlanta airport at all. I can work around that, but at 6:15 in the morning, they only had one line for bag check, with only one person working the counter. The line was very long, and I thought it would take an hour to get my bag checked. They added a few more agents and then opened a whole new counter, and I sprinted over there when they announced it, so I got through pretty quickly. But as a general practice that I would recommend planning extra time here.
Monitor security lines waiting time on your phone. The TSA pre-check and Clear lines were both quick and easy. The bin stations for the security scanners had every other one blocked off to create the social distancing, so at a more crowded time, that could have created a logjam.
Sky Club changes to locations, hours, and services. Delta has closed half of the Sky Clubs at the Atlanta Airport, so that at this time the only ones open are at A17, D27 and the F international concourse. They have also modified hours, which I knew but didn’t really pay attention to, so I arrived there at 6:45 am, and they didn’t open until 7 am. No real coffee cups or glasses, only paper or plastic. No oatmeal for breakfast, only packaged items like fruit, hard-boiled eggs, muffins, and bagels (but no toaster). More limited bar menu, so no Bailey’s Irish Cream right now.
Most folks wear masks. The airports and the airlines have asked people to wear masks, and I would say that it looked like about 75+% of people were wearing masks walking around the airport and on the planes. Obviously, when folks are eating or drinking, the masks have to come off, but most people seemed to comply when walking in public areas.

Book your flights ahead. Delta has blocked middle seats in its focus to reduce the number of passengers to have only 60% in Main and Comfort Plus and 50% in First Class. They have remained true to their goal, but that is resulting in oversold flights. On Monday, every flight from Atlanta to Minneapolis was sold out by three days before.

Opportunity if you are flexible. Because our flight out of Atlanta was oversold, Delta was making some sweet offers – $1200 to switch from the 8:30 am flight to the 5:30 pm flight. I jumped up to take the deal since I had already built in extra flight options, but it turned out the evening flight from Minneapolis to Rapid City was sold out, so I couldn’t take the alternative flight to score the $1200 gift card. Then they offered $1500 and no takers. At $1700, a guy finally stood up to give up his seat. 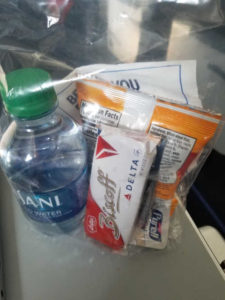 Get drinks and snacks to take onboard. To reduce touchpoints, Delta has drastically changed the food and beverages onboard. Everyone in every cabin gets the same snack pack – a Ziploc bag with a small water bottle, Cheez-its, and biscoff cookies, along with a Purell packet. To satisfy my diet coke fix before boarding, I had to go to the food court to get a fountain diet coke plus an extra bottle to get me through the whole flight. So, plan ahead for what you may want to eat or drink onboard.

Overall, the flight experience was different, yet not uncomfortable. I was prepared with my drink and snacks, and the mask was not too bothersome in the public spaces. And there were some positives. With Delta’s focus on spacing people on the flight, it was wonderful to have the middle seat free. For disembarking the plane, they asked folks to stay in their seat and go row by row, which was so calm and pleasant compared to the usual crowding in the aisles. I would be comfortable scheduling another flight under the current conditions.