Warnings and reminders are the theme for today’s article, as I share my own little escapade with trouble.

They Stole My Phone

A week before my trip to Greece, I got a brand new smartphone and since it was almost the latest and greatest, it was pretty pricey. I was a bit paranoid with this new phone as I traveled, so I tried to keep it tucked away. The first morning that I was in Athens, I did a little sightseeing before I met my guide for my food tour. I got a bit lost and didn’t pull out my phone for directions as I was concerned about flashing this new phone in public. I made it to my food tour and after a few other stops, we went to a place which serves souvlaki, which is classic Athens street food of meat wrapped in pita. The stand we stopped at was very crowded, so my guide got in line while I held a table. 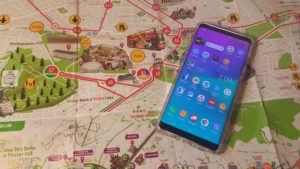 After waiting quite awhile and looking at my map, I finally pulled out my phone. My phone was laying on the table in front of me as I read my email, and all the sudden a piece of paper covered in Greek words landed on top of it. I looked up and there were two teenage boys, around 13 or 14. Since I had already had a number of incidents with people asking me for money, I figured this was yet another one and I said “No, I’m sorry.” The boys kind of shrugged, and one picked up his paper and I looked down and saw my phone was gone. I yelled at them very loudly, “Give me my phone!!” and grabbed the paper that had my phone folded in it. Once again, they shrugged their shoulders and just walked away, as though they are used to being caught sometimes and it’s no big deal as they move on to the next target. I was very blessed with novice thieves, because I am firmly convinced that later in the season, once they had really practiced and perfected their scam, they would have moved a whole lot quicker and I would have never recovered my phone.

So this was a classic ploy and one you really need to be aware of when you travel, particularly in popular tourist locations around the world. Most of the tactics used by thieves are based on some type of distraction. They are very skilled in sleight-of-hand and stealing items without being detected. It’s imperative to have an awareness, but even more to practice some basic tips to protect yourself from ever being a target. 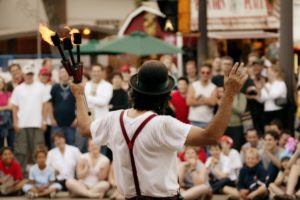 Here are some of the typical distractions that they will use to steal from you:

I was incredibly fortunate to be the victim of two junior apprentice thieves and able to recover my stolen phone. I already know all these tricks and still I was careless even though I know better. Remember, for these thieves, it’s their job to steal as much as they can while you’re paying attention to your fabulous surroundings. Be aware, be alert, and follow the tips that will prevent your items from being at risk.