Seeking the Big 5 on Safari 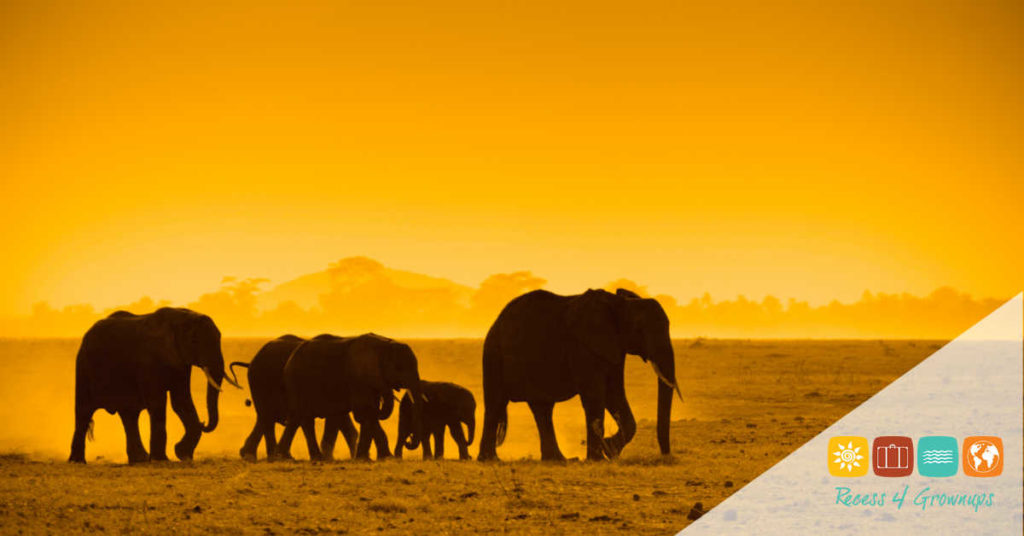 Learning about new experiences and destinations for future travels is still something we can enjoy now, and this week’s article is inspired by the dream of an African safari…

Seeking the Big 5 on Safari 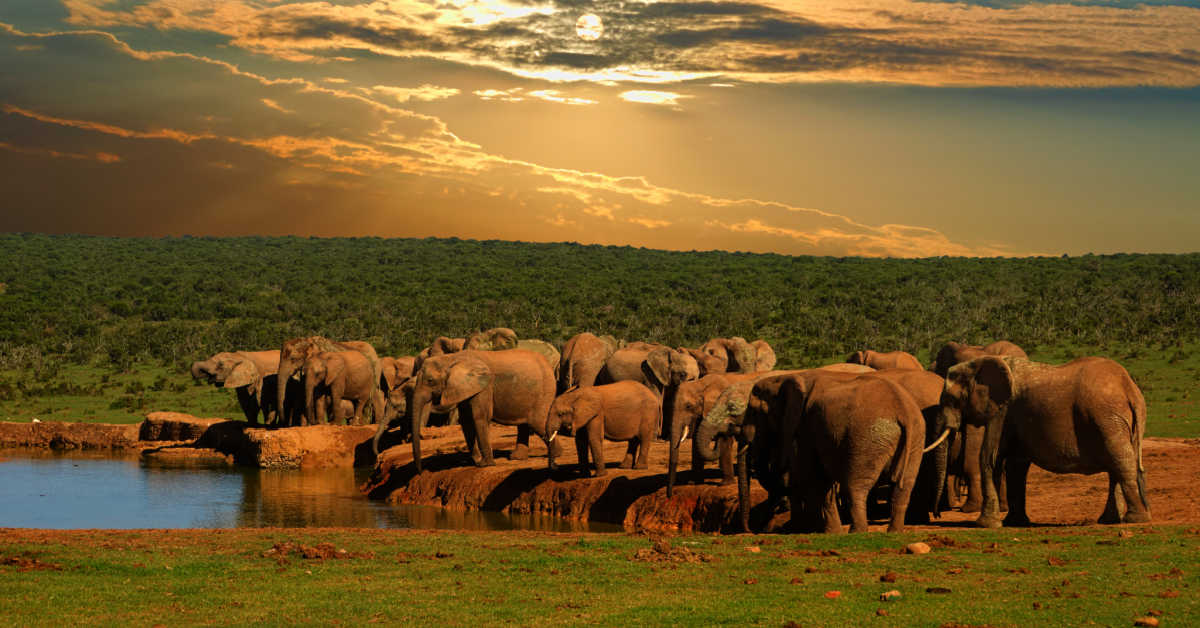 As we continue to imagine future travel adventures, one of the most exciting bucket list experiences is a safari in Africa. A trip to Africa can actually have a few different focuses, with Gorilla Trekking or South African wine tasting as options, but the first trip usually focuses on a safari, with the desire to see the ‘Big 5’. As common as that phrase is when discussing Africa, a lot of folks don’t actually know which animals fit that category or which areas best help fulfill that goal.

If you had to guess which animals are in the Big 5, you probably would get a few right off the top of your head – African elephants and lions are at the top of the list. Thinking a little harder, you may come up with a few more, like the leopard and the rhinoceros. The last animal is not one I immediately think of related to Africa – the Cape buffalo. 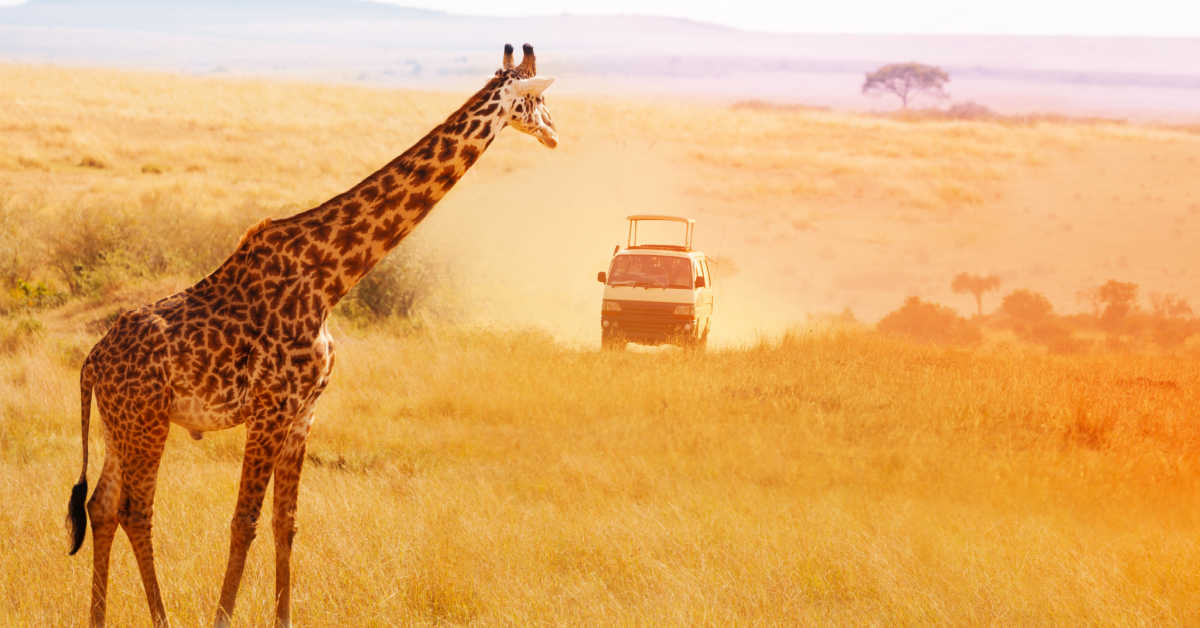 Of course, as we imagine Africa, there are many other animals that we want to see – zebras, cheetahs, giraffes, (and maybe a meerkat, warthog, and hyena after seeing the Lion King numerous times) but watching for the Big 5 is definitely one of the highlights in any safari.

Big 5 Then and Now

The history of the Big 5 is actually quite different from now because it came from game hunters back in the 19th century. Going hunting for one of the most dangerous animals while tracking on foot created this list of the Big 5. Over time, conservation efforts have shifted the focus so that the Big 5 is now more of a marketing phrase than about game hunting, and it’s also an aspiration for photographers to ‘shoot’ the Big 5 through a lens.

All of the animals except for the Cape buffalo are on the endangered species list, and certain specific sub-species are already extinct.

While trophy hunters still visit Africa today, there are strong conservation efforts to preserve the endangered populations. The game reserves use the funds of tourism to support endangered species’ rehabilitation efforts, and the anti-poaching laws reduce but don’t eliminate poaching. 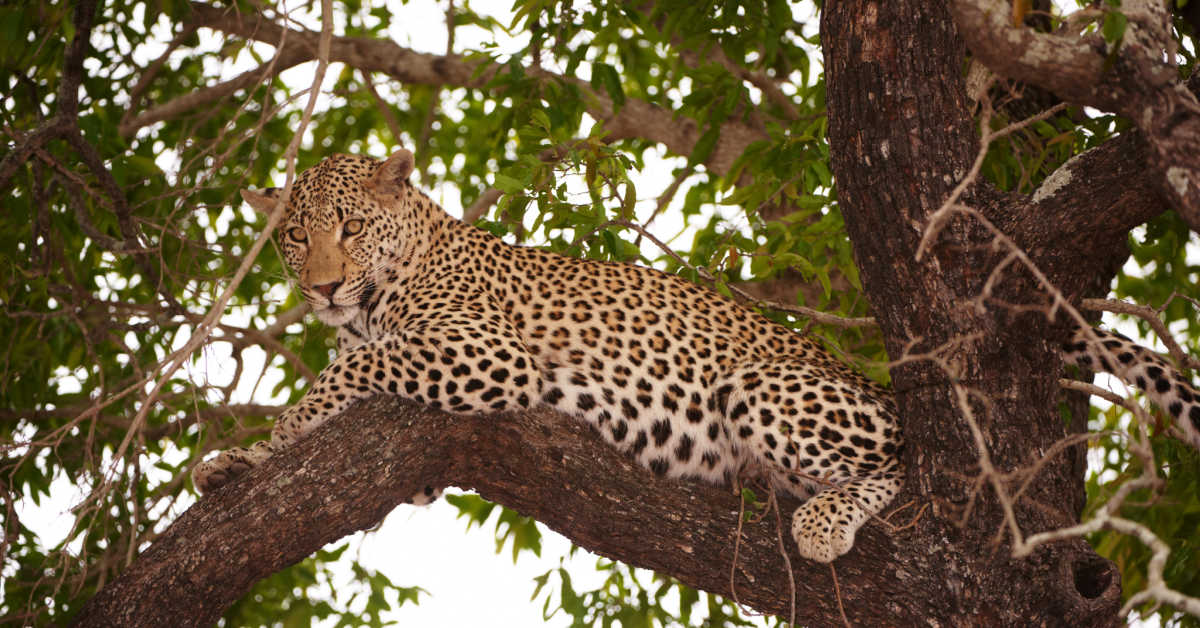 The leopard is the most elusive of the big five, given its nocturnal nature and the spotted coat, which acts as useful camouflage. They tend to live on their own, which makes them harder to spot. Found widely in North Africa and sub-Saharan Africa, the leopards have a different color depending on the habitat and location. They inhabit the Grasslands and Savannah, excluding the sandy deserts.

Lions are at the top of the list to spot on an African safari. This muscular, deep-chested animal inhabits the savannas and grasslands of the sub-Saharan forests of Africa. The ‘king of beasts’ is often found in groups living with their offspring; the average size of a pride is about fifteen lions, including cubs of both sexes. 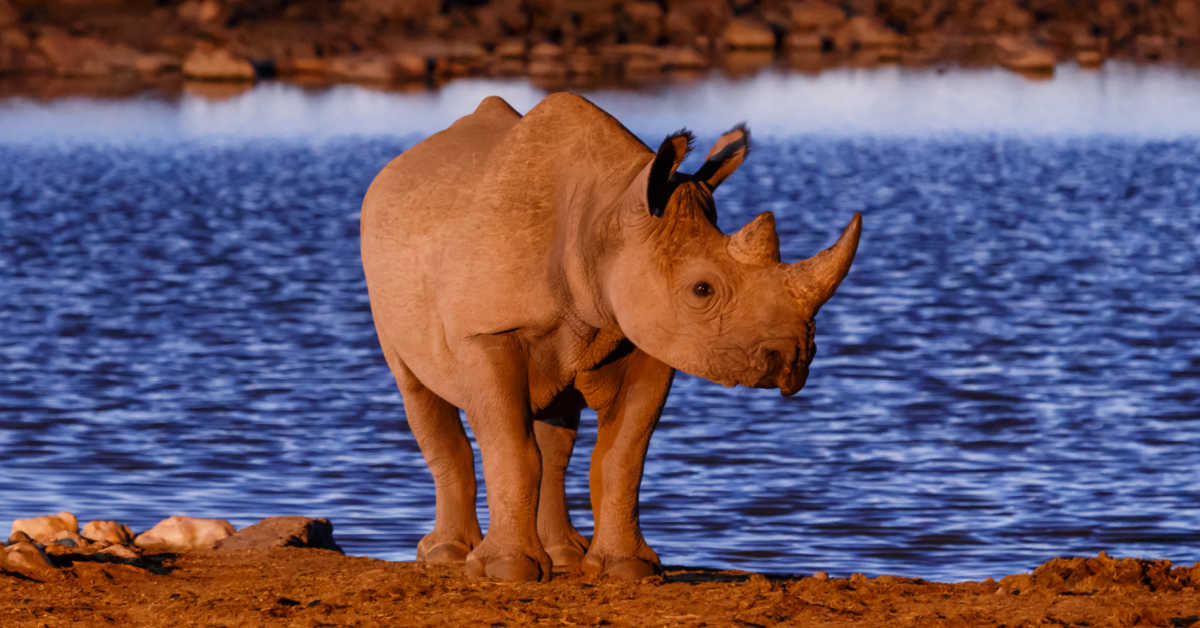 Rhinos are poached for their horns, so they are a highly endangered species. The Black rhino has two horns, and they play a vital role in protecting other species, including elephants. Owing to their precious horns, they have been targeted by poachers across centuries, and some sub-species of the black rhinoceros have gone extinct while others are at critical risk.

The African elephant is intriguing as the largest land animal and typically weighs up to nine tons. Using their huge tusks, they can dig up dry riverbeds, thereby helping other animals access drinking water. This happens mostly during the dry season. The Savanna sees the uprooting of big trees from where they get their food. They are endangered as their ivory tusks have been hunted for hundreds of years, and more efforts are made to conserve their numbers. 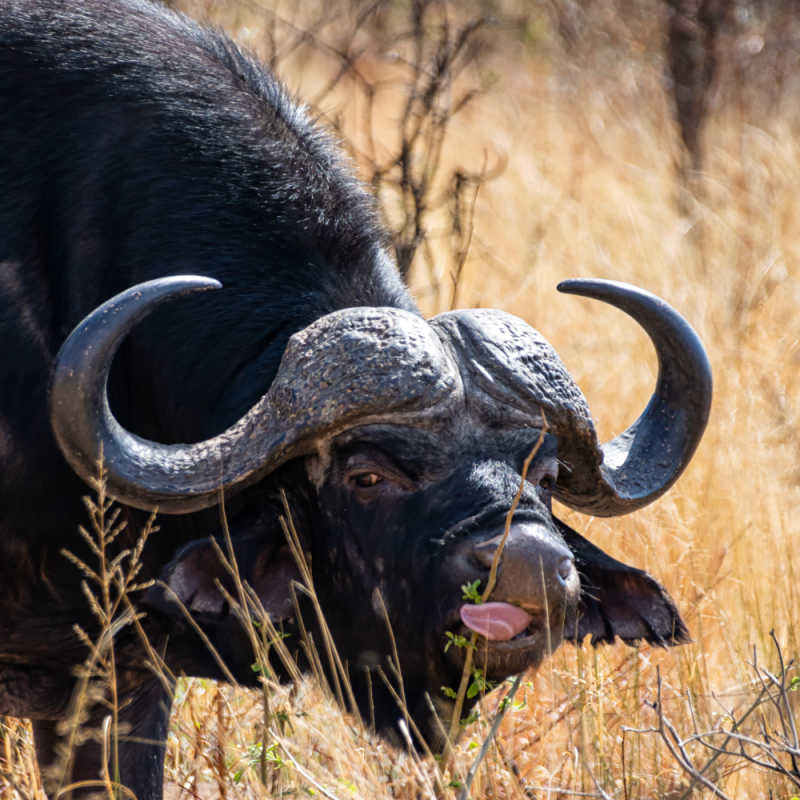 Of all five animals, the Cape buffalo is the most dangerous because its nature is very territorial. This is the only type of buffalo in Africa and weighs between 1000-1900 pounds. The animal will graze on grasslands and give the impression of being calm and rather lumbering, which can be a grave mistake. The Cape buffalo runs approximately 30 miles per hour, and when he drops his head, his speed, size, and horns create a fatal situation.

Where to see the Big 5 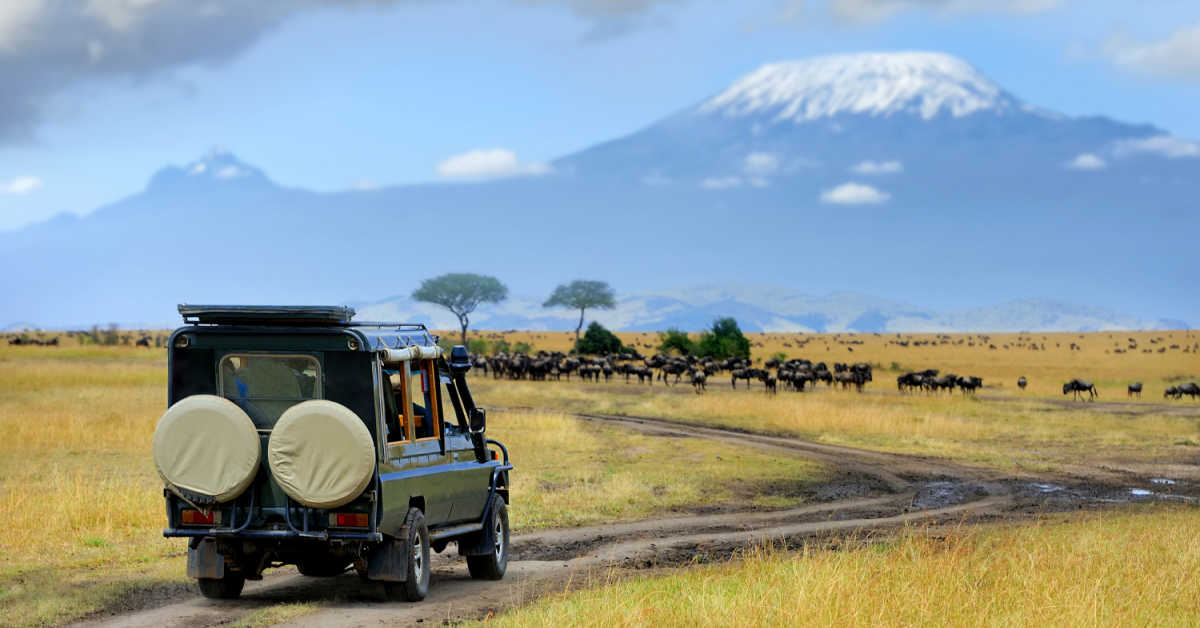 Kenya features several famous game reserves. Masai Mara provides some excellent game viewing, and you’ll likely see elephants and buffalos, along with giraffes, hippos, and crocodiles on a typical game drive. It hosts a substantial population of lions and leopards too. The Masai Mara is also very popular for the migration of wildebeest each year. Nairobi National Park in Kenya acts as a rhino sanctuary.

South Africa is an appealing destination as it has a diversity of beaches, cities, and culture in addition to safaris. The Sabi Sand Game Reserve is a top destination for those searching for the Big 5. It shares an unfenced border with South Africa’s premier game park, Kruger National Park. Kruger has a high population of each of the Big 5. 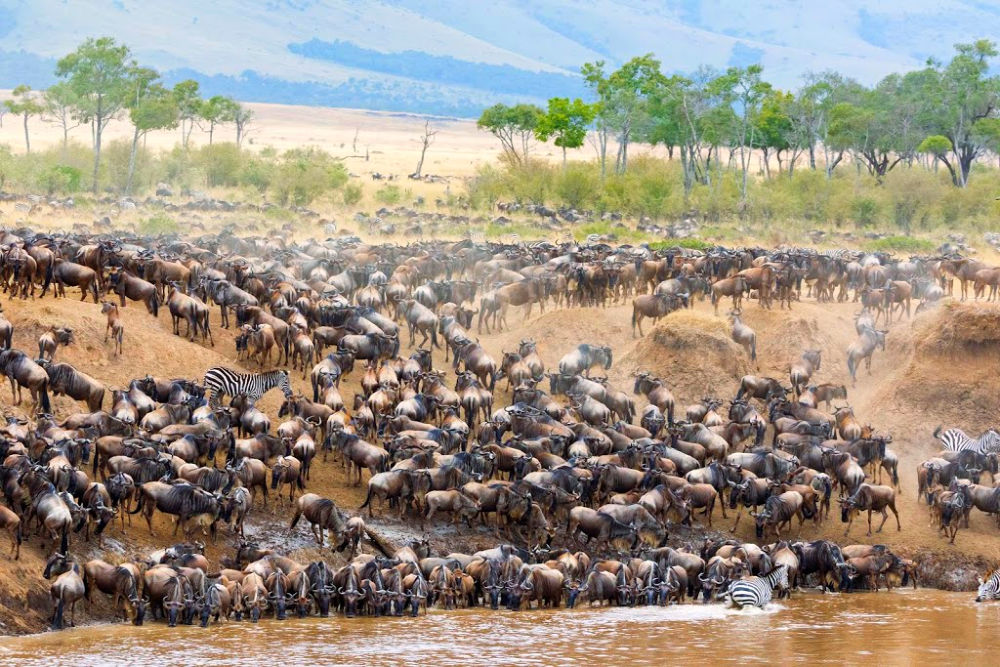 Tanzania is the sight of two famous natural areas where you can see the Big 5 – Serengeti National Park and the Ngorongoro Crater. The grasslands of the Serengeti highlight the herds of wildlife and interactions between them. It also is well known for an annual migration of wildebeest. Ngorongoro Crater is a volcanic caldera that has been designated a UNESCO World Heritage Site, and is now a conservation area. The open grassland is the optimum setting for the Big 5.

While the Big 5 is a focus when on safari, a trip to Africa would include seeing the broader abundance of wildlife there, and we would also be looking for zebras, giraffes, cheetahs, hyenas, and so many other intriguing animals. Having the Big 5 goal just gives us another item for our bucket list.