An authentic experience that has nothing to do with being green… 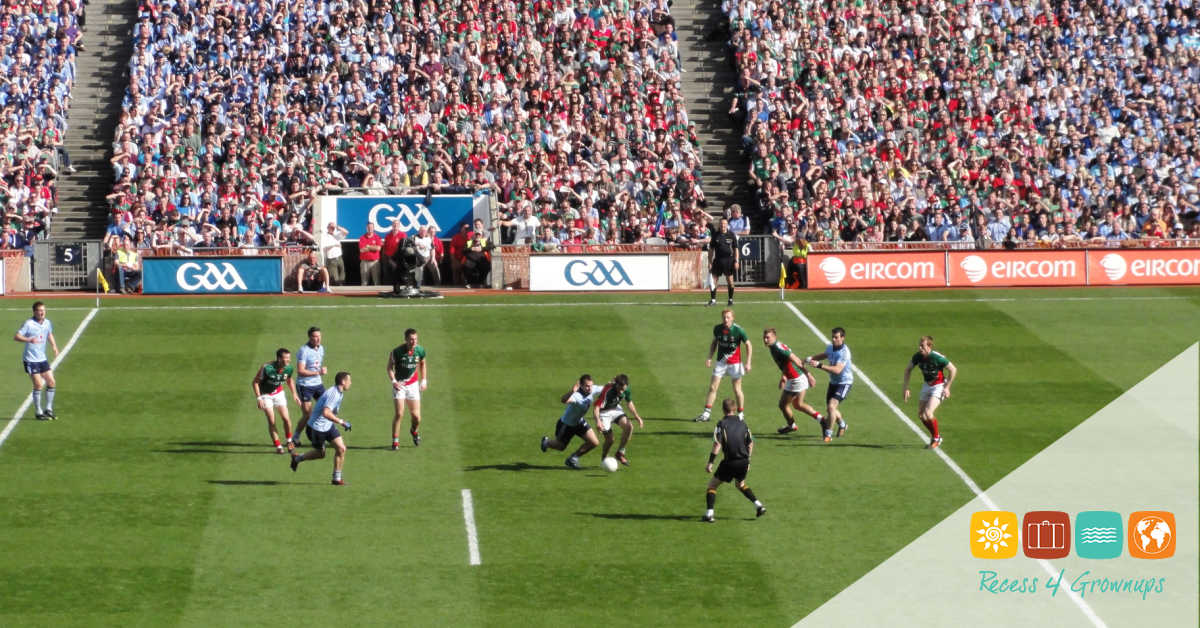 Today is Saint Patrick’s Day, so we’ll see a lot on TV and social media with green clothes, green hair and green beer in celebration. But since Ireland is my special place (I normally go once or twice a year), I want to share an aspect of the Irish culture that I think is one of the most authentic experiences… 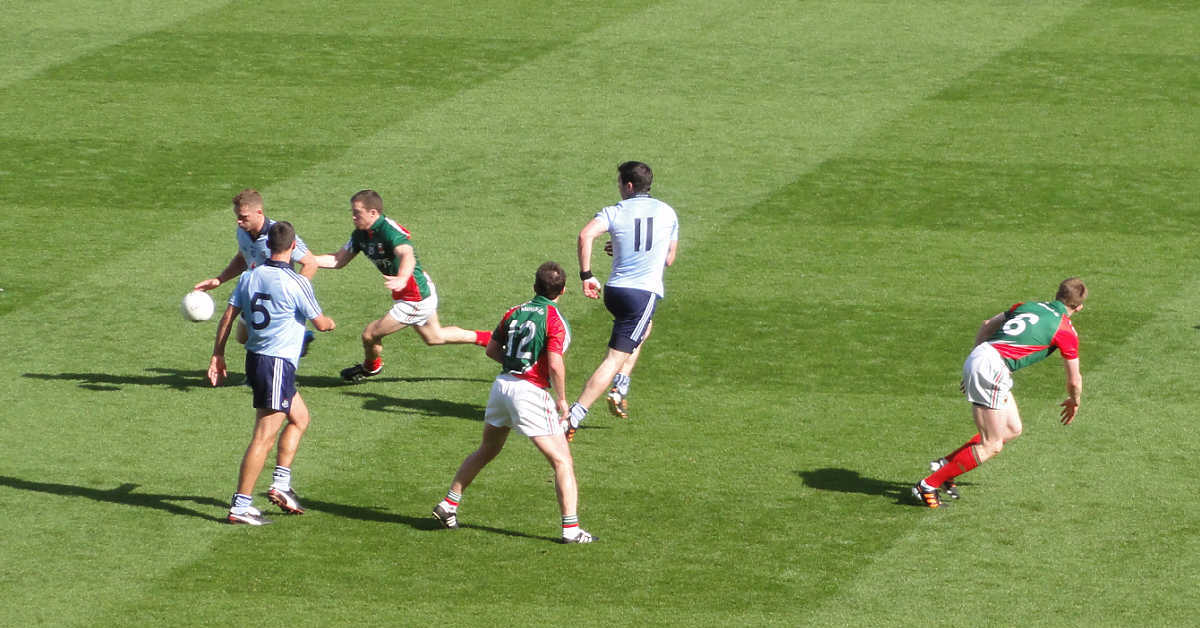 There are numerous reasons you may wish to make the cross-Atlantic trip to Ireland from the United States. Jaw-dropping natural landscapes, friendly local people, historic castles, and lively and architecturally beautiful cities are just a few examples. But to get a truly authentic glimpse into Irish culture, you need to know a little about sport. In particular, hurling and Gaelic football are two sports you’ve probably never even heard of. But they are deeply rooted in Irish heritage, and learning a bit about them is very important when trying to understand the country. In this article, we’ll tell you a bit about uniquely Irish sport and how it is so ingrained in the nation’s culture. 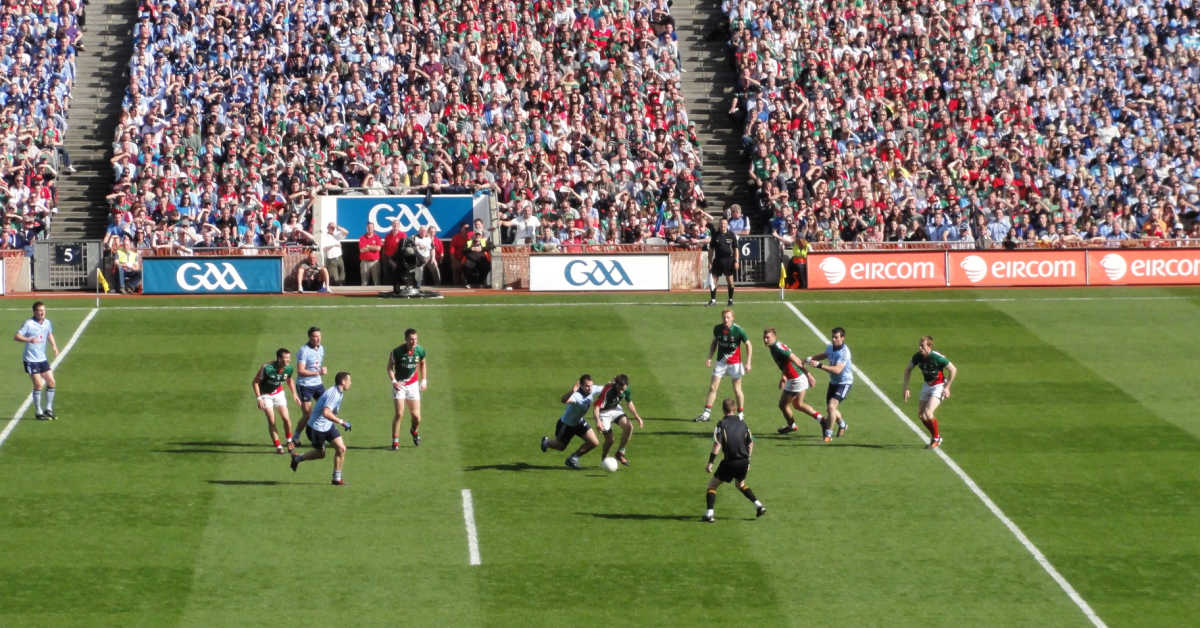 There is also a community feel to the teams and competitive leagues. Since it is an Irish-only game, players tend to play for the local teams in their county. Whereas the Los Angeles Lakers or Green Bay Packers may trade players from teams, most hurling and Gaelic football teams are small, represented by members of the local community. There are no astronomical wages or sponsorship deals either. Both are amateur sports; you are likely to spot your favorite attacker or goalkeeper working in the local supermarket or servicing your car during the week. This down-to-earth element of Irish sports lends to their appeal. Unlike other more commercialized sports, they have never been taken away from the masses; they remain a huge part of local communities. 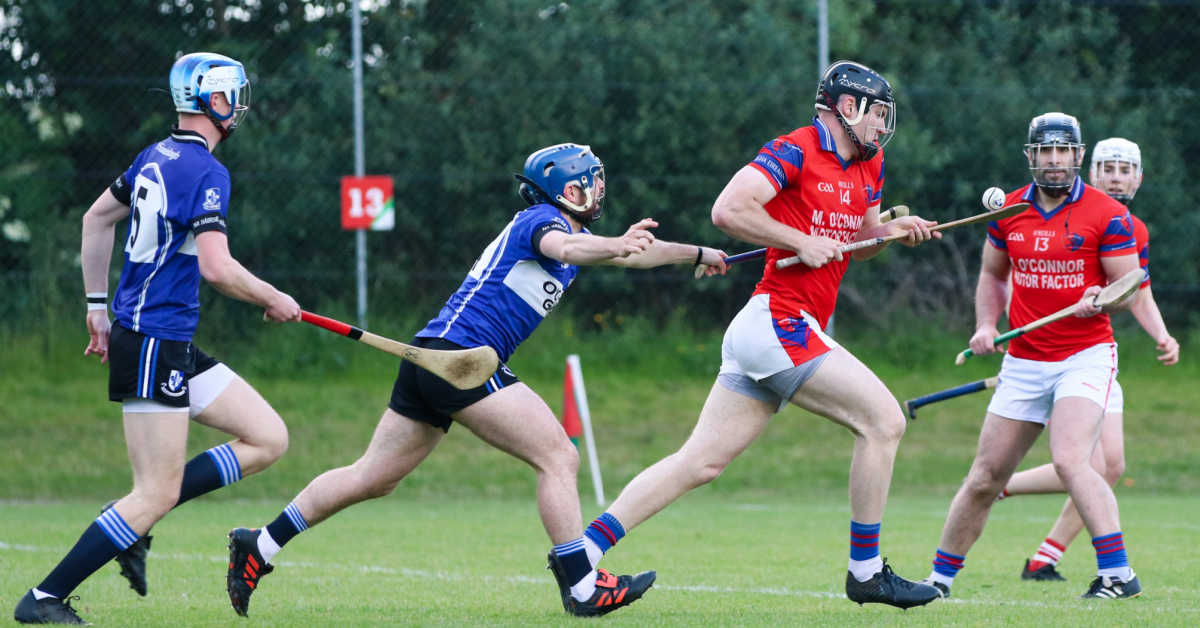 So just like here in the US, kids grow up playing their Irish sports, but the thing that strikes me is the difference in the fact that the adult leagues are amateur only, and there is intense loyalty to one’s home county – no switching to another county just for a better deal. It’s all about the purity of the sport and the local cultural identity.

The two most popular Irish national sports have some similarities. Both are played by teams of 15 men or women. These teams are comprised of a goalkeeper, six defenders, two midfielders, and six attackers. They have the same scoring system, too, and are both a sort of hybrid between rugby and soccer, though hurling also has a bit of lacrosse thrown into the mix! Goalposts are 21 feet wide with a crossbar at 8 feet high. Shots that go over the crossbar are worth one point, while harder to score goals that go under the bar are worth three. Both games are also intensely physical, with shoulder barging, pushing, and more all permitted. 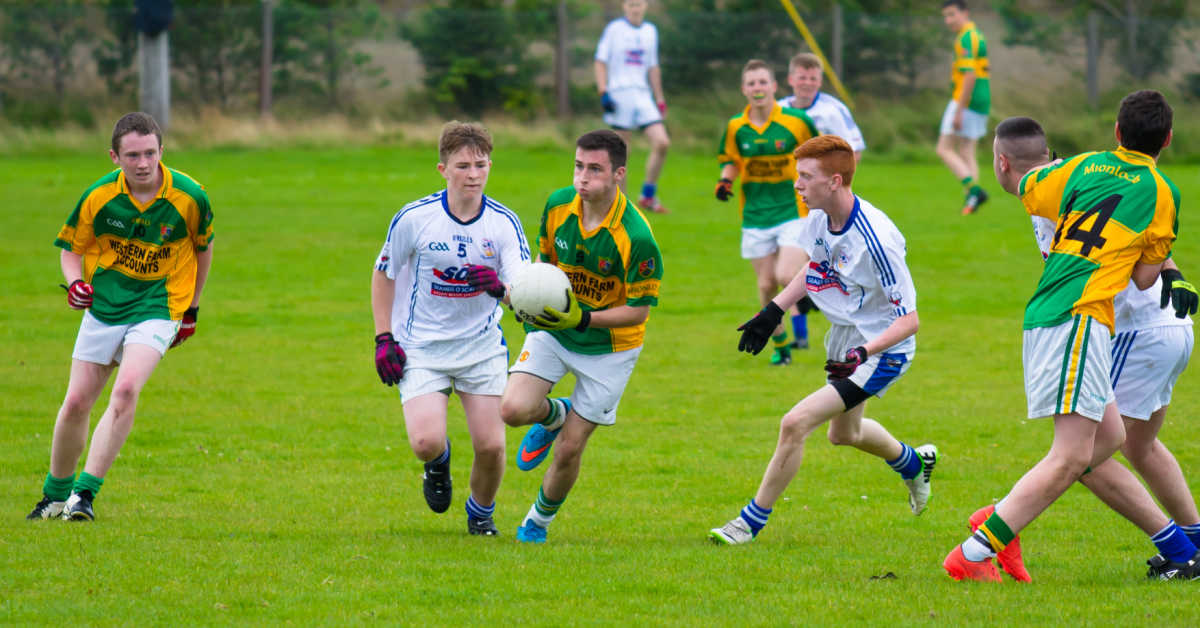 But this is where the similarities end. In Gaelic football, there are no sticks, and it is as much about using your hands as your feet. The ball is slightly smaller than a soccer ball, and can be kicked, caught, thrown, and punched. You cannot move more than three steps with the ball in your hand, but the process of soloing (running and repeatedly kicking the ball into your hands and dropping it back to the feet) is allowed.

Hurling is played with a stick, called a hurley, and a little calfskin ball called a sliotar, about the size of a tennis ball. The ball is thrown from player to player using the hurley and can also be caught by hand, though this limits the number of steps the player can take. Compared to American football, soccer, and just about every other mainstream sport, there are relatively few restrictions on how play can develop. 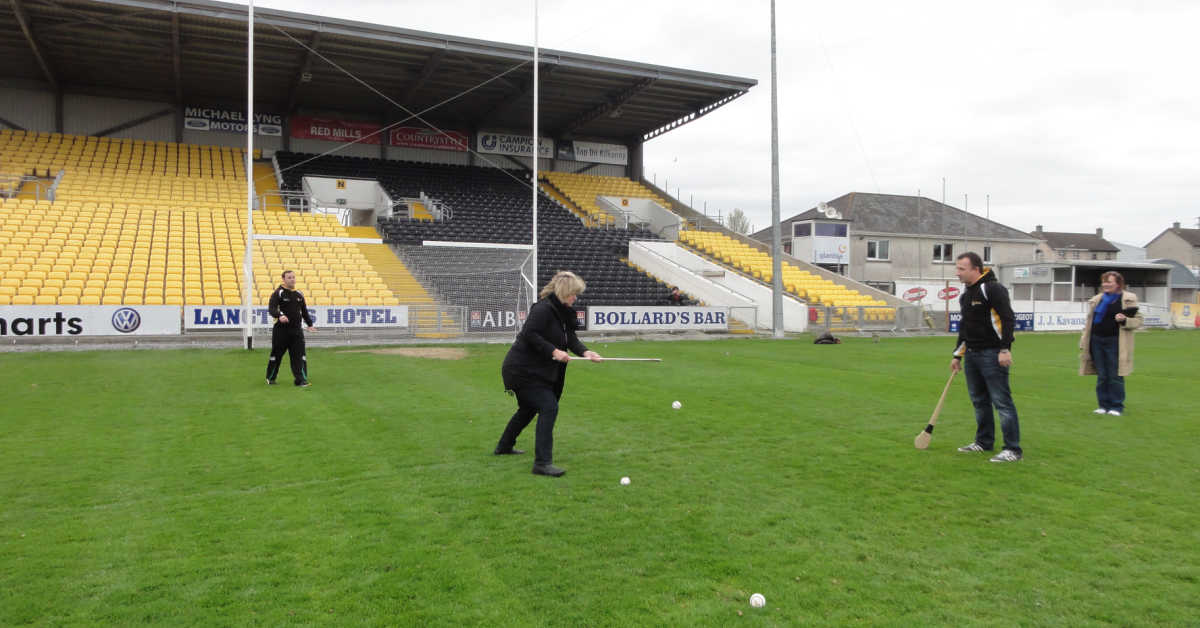 If the timing works out, I love to include an experience of watching Gaelic football or hurling in an itinerary I plan for my clients. There are also places around the country where folks can experience learning the rules and try playing a bit on the pitch to get an appreciation of the sport (that’s me trying hurling). If a live game doesn’t fit the schedule, just going to the local pub and hanging out with the locals watching Gaelic sports on TV is an authentic experience.

Though it remains community and county-based, there is an annual national championship, contested by inter-county teams across the country. The knockout tournament always ends with semi-finals and final held in Croke Park, Dublin, usually in September.

Croke Park is vital to Irish history – fourteen fans were shot dead by police in the stadium during the notorious Bloody Sunday of 1920. The stadium has taken on symbolic importance, making attendance at the championship series all the more important to Irish supporters. It is the lifelong dream of many fans to get a ticket for the final, as they are always in red hot demand. 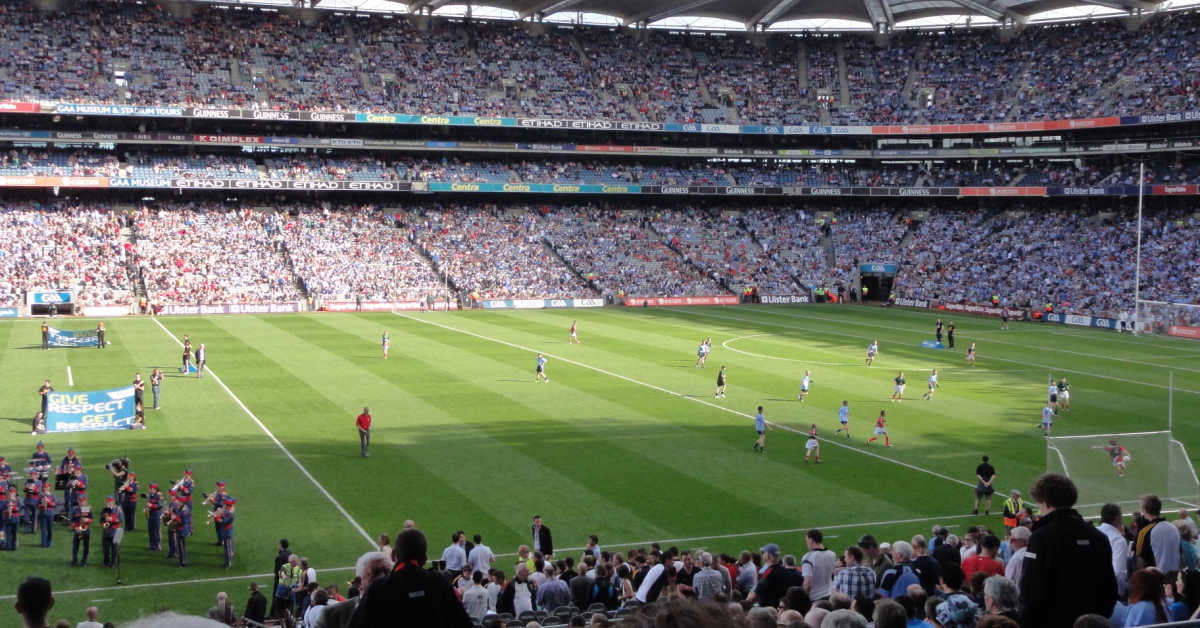 I have to share that I have been so fortunate to see these sports in Croke Park. From my specialty in hosting groups of American football fans in Ireland, I’ve been in Dublin at just the right time to experience the thrill of being in the stadium, surrounded by ardent Irish fans cheering for their teams. In 2012 I got my first introduction to the importance of Gaelic sports when I attended the semi-finals of the All-Ireland Gaelic Football Championship, between County Dublin vs. County Mayo; I was all decked out in Dublin’s blue colors, but Mayo won.

I was so enamored with Gaelic sports that I created a sports-themed tour of Ireland for the American fans attending the Georgia Tech vs. Boston College game in Dublin in 2016; the tour culminated in attending the All-Ireland Senior Hurling Championship Final in Croke Park, where Tipperary beat out Kilkenny. Seeing the Hurling Championship is now on my husband’s bucket list. 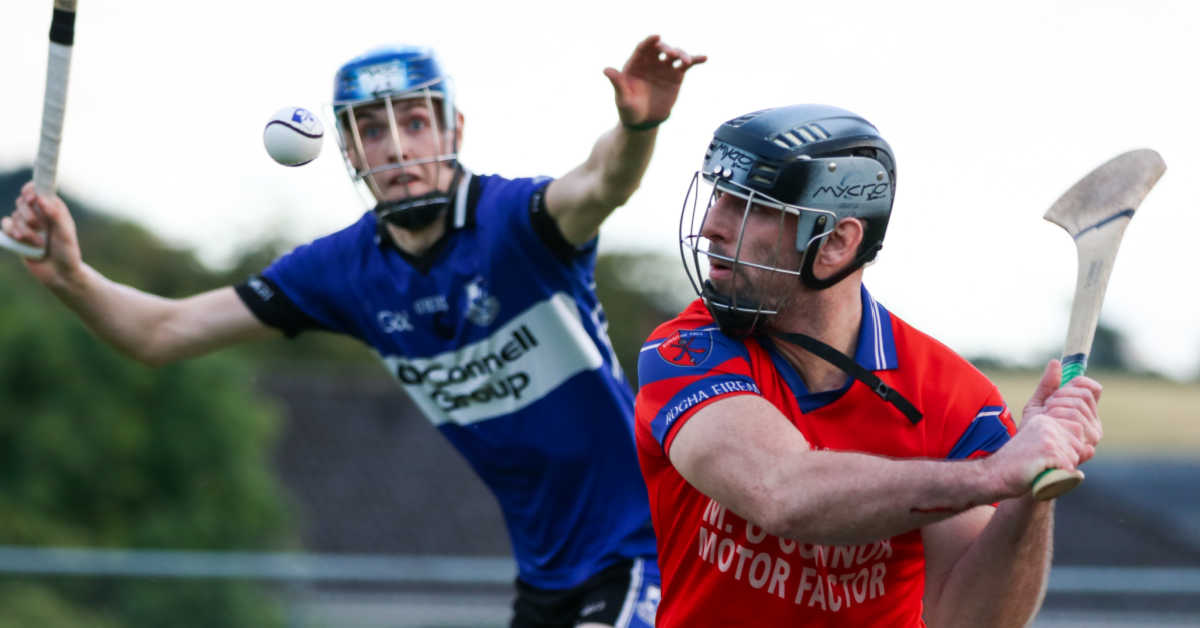 Because sport is such a massive part of life in Ireland, it is impossible to understand the country’s culture without knowing a bit about the importance of hurling and Gaelic football. While sport is important to billions of people worldwide, the uniqueness of these Irish sports is integral to Irish national identity. When you’re enjoying a pint of Guinness in a traditional Irish pub during your visit, they are likely to be showing sport on the corner television, and the locals are sure to be impressed if you know a bit about their pride and joy.